12.08.2022The story of Kremer Racing's great triumph in Le Mans in 1979 and a driver who wanted to buy the car just before the race 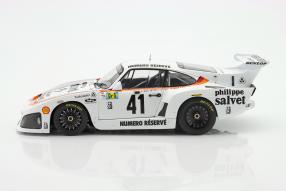 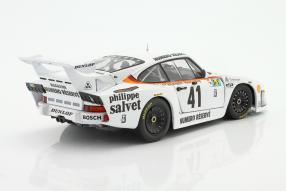 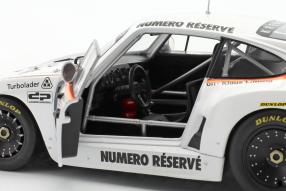 The 47th edition of the 24 Hours of Le Mans 1979 was all about Porsche. After the retirement of Renault from the popular racing series, the Porsche 935 went to the start as the favourite. In the end, it was the vehicle with starting number 41 that crossed the finish line in first place after 24 hours, driven by the two US brothers Bill and Don Whittington and the German Klaus Ludwig. It is the model of this Porsche 935 K3 that we are presenting today in our blog. The model in scale 1:18 from the label Solido is a reminder of the day in 1979 when the team Kremer Racing wrote history at Le Mans. The model's front wheels can be steered and the doors can be opened to reveal the detailed interior of the Porsche. Solido has also managed to pick up small details, such as the fire extinguishers inside. For collectors of legendary racing cars or fans of the Le Mans winners, this is a model that definitely deserves a place in the showcase.

In addition to the car with starting number 41, the team of Kremer Racing had also started with two further Porsche 935 in the Groupe 5 in Le Mans. The German Klaus Ludwig had already proven during the German racing championship with two wins and a second place that he and the Porsche 935 are a dream team. Due to this fact and the lap times, which Ludwig drove in the training, team boss Manfred Kremer quickly decided that the German should also sit in the cockpit for the start of the race. Bill Whittington felt so hurt in his pride that he asked Kremer before the start what the 935 K3 use cost him. After the latter informed him of an approximate sum of 290,000 dollars, it was Bill Whittington who appeared in front of Kremer shortly afterwards with a suitcase containing this sum. However, Kremer refused to let Whittington as the starting driver.

The vehicle of Kremer Racing was brand new and had only completed 39 test laps on the Nordschleife at the time it started at Le Mans. The performance of the Porsche was nevertheless consistent. Only the fuel stops during the race let the Kremer team lag behind the two Porsches of the Loos team. With the rain getting heavier and heavier, it was Klaus Ludwig who then started an unbelievable race to catch up. Three hours before the end of the race, the Kremer-Porsche was in first place with a lead of 16 laps. Then came the shock when Don Whittington was stranded with a broken toothed belt. The American lay down in the dirt under the car in the pouring rain and managed to pry the spare belt onto the pulley. The engine started, but the repair was short-lived as the belt flew off again in the Mulsanne corner. Then continuous radio communication began between Box and Whittington. The pit crew, who used a replacement engine as a template, tried to explain to Whittington over the radio how he could mount the replacement V-belt as a replacement toothed belt in order to at least make it to the pits. Whittington succeeded after several attempts, half face down in a pool of water, and the car found its way into the pits. After more than an hour of repairs, the Kremer Porsche started the race again, still with a lead of three laps. In the end, the 935 K3 from Kremer won in Le Mans against all the works teams that competed and thus went down in history. 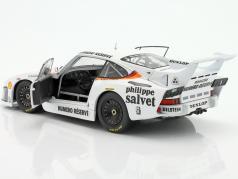 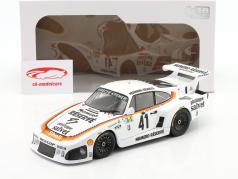