For Mercedes, the Formula 1 season 2021 was in shards after the unforgotten World Cup Showdown. 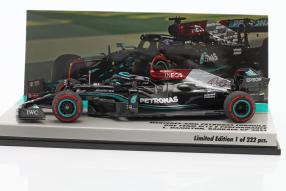 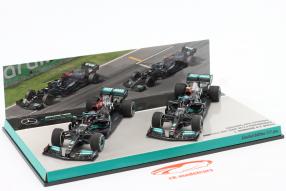 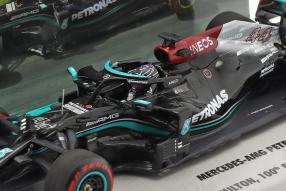 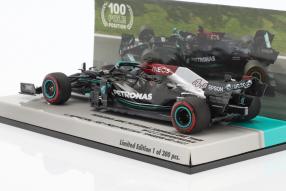 In the very last lap of the Abu Dhabi-Grand-Prix, Lewis Hamilton lost the leading - and thus the world champion title - to Max Verstappen. Even if the eighth world championship that was ripped from the Briton's hands weighs heavily, Hamilton, his Mercedes team and his team-mate Valtteri Bottas once again asserted themselves at the top of the premier class and celebrated remarkable successes. Minichamps has recorded some of these milestones in the form of collector's items - of course in limited quantities.

The season start in Bahrain, first led Max Verstappen to the pole position. The strategy gave Hamilton and Mercedes the lead. Hamilton also knew how to defend Verstappen's later final attack. The opening win went to the seven-time world champion. Minichamps has released the winning car in scale 1:43. The model is limited to 222 pieces and is exclusively available at ck-modelcars.

At the start of the previously inglorious season 2022, Lewis Hamilton had an outstanding 103 pole positions in his statistics. The Brit thus confidently leads the all-time list of the best. Michael Schumacher has 68 pole positions. Ayrton Senna started 65 times from the best grid position. At the Spanish Grand Prix in Barcelona in 2021, Lewis Hamilton made his statistics entry in three digits and clinched his 100th pole position. Minichamps has also issued this car exclusively for ck-modelcars with a limited number of 300 models in scale 1:43. Incidentally, when starting from first place, Hamilton immediately lost the lead to Max Verstappen, who started from second place. However, a late pit stop and fresh tires enabled Hamilton to regain the lead shortly before the end and ultimately win the race.

Lewis Hamilton could count on the support of team mate Valtteri Bottas throughout the whole season. In Hamilton's service, the Finn managed to win the rainy Turkish Grand Prix. Ten more podiums brought plenty of points for the Constructors' Championship, which Mercedes won ahead of Red Bull. Minichamps has arranged both Mercedes racers in a 2-car set, made of resin and limited to just 111 pieces.

It might not be the most successful Formula 1-season of Mercedes, but probably the most memorable of the young past. For this reason alone, the Minichamps-models bring innumerable memories to the owners' collections. 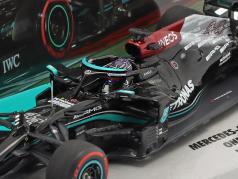 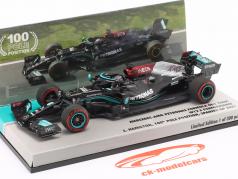 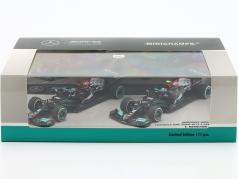 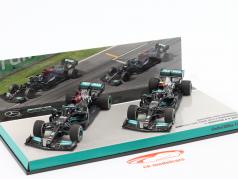