01.04.2022The most recognizable and iconic official car James Bond has ever driven. The Aston Martin DB5 is used in a total of 9 films in the series 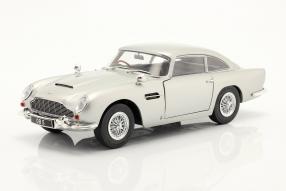 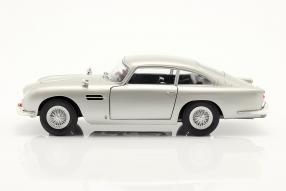 The Aston Martin DB5 is the successor of the DB4. The abbrevation DB in the name stands for the owner back in the days of Aston Martin David Brown. The DB5 belongs to one of James Bond's most famous company cars. In a total of nine films, James Bond drives DB5. One more reason for the Solido label to include the DB5 in its range. As befits an Aston Martin in his Majesty's service, the Solido model is right-hand drive. The interior was replicated from the original by Solido. The two doors can be opened and the front wheels are steerable. Fans of the James Bond series should grab the DB5 and add it to their collection as a timeless classic. The DB5 is also indispensable in a collection of well-known film cars.

James Bond is Aston Martin, you could almost say. James Bond drives an Aston Martin in Over 10 Films, the current series of over 20 films. In 9 films it is a DB5 that is used. In 1964, Sean Connery drove an Aston Martin DB5 for the first time in "Goldfinger". Likewise a year later in "Thunderball", in which the previous year's DB5 was equipped with additional water cannons. Bond actor George Lazenby drove an Aston Martin DBS in "On Her Majesty's Secret Service" in 1969, before the English premium brand quieted down for a few years. It was not until 1987 that an Aston, starring Timothy Dalton in The Living Daylights, returned to the cinemas in the form of the Aston Martin V8 Volante. After another and even longer break, the 1995 film "Goldeneye" with Pierce Brosnan heralded a series that has remained unbroken to this day. Because here again a DB5 is used in the film. Two years later in "Tomorrow Never Dies" and another two years later in "The World Is Not Enough" James Bond also drives DB5. Daniel Craig, who made his debut as a Bond actor in "Casino Royale" four years later in 2006, has driven Aston Martin DB5s in all parts of the series ever since. In Skyfall (2012), Specter (2015) and No Time To Die (2021).

The Aston Martin DB5 was introduced in 1963. The 4 liter six-cylinder engine with a five-speed gearbox had an output of 286 hp at the time. In addition to the standard version, this engine was also installed in the DB5 Convertible version. 123 convertibles were built in the two-year construction period of the DB5. Only 19 of these were left-hand drive. The DB5 was even rarer in the Shooting Brake version. Only 12 examples were built of the version that Aston Martin owner David Brown had built for his private needs as a hunter. However, the Shooting Brake was difficult to control when loaded. The reason for this is the rigid rear axle, which was adopted from the basic version. If you wanted something sportier, you chose the DB5 Vantage. Here, too, only 65 copies were delivered at the end of the construction period. The performance-enhanced version with three Weber carburetors achieved 318 hp. 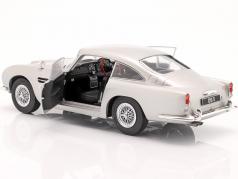 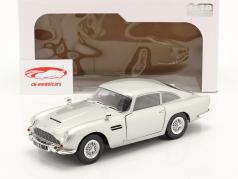