23.02.2022In time for the theatrical release of the new Batman, Jadatoys presents the Batmobile in scale 1:18 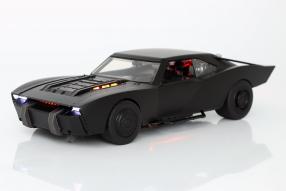 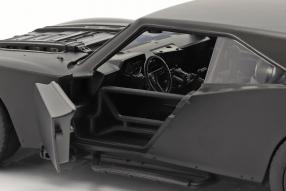 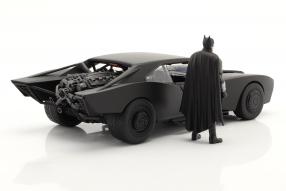 The new Batman is going to start in the German cinemas on March 3rd, 2022. The story about the billionaire Bruce Wayne, who fights for law and order in his hometown Gotham City with the support of his butler Alfred and the honest police officer James Gorden, enters the next round. The Batmobile has always been one of the most popular movicars in the modelcar sector. The label Jadatoys presents the Batmobile in scale 1:18 to match the film. The version in scale 1:24 will follow. In contrast to previous very futuristic versions of the Batmobile, the reference to a road vehicle is more recognizable in the new film. The model allows deep insights into what the viewer gets to see in the cinema. The doors and the bonnet can be opened and allow a glimpse of the detailed replica of the interior and the engine compartment. In addition to the moving features, the model also offers numerous illuminated effects. The batteries are conveniently included with the purchase. The model of the Batmobile by Jadatoys is very good value for money, also due to the fact that a Batman figure is included in the scope of delivery.

Fans of the Batman movies will enjoy it again in 2022 when Batman (first played by Robert Pattinson) goes on a crime hunt in Gotham City. Numerous clues in the film challenge Batman's investigative skills and bring characters such as Catwoman, the penguin, mafia boss Carmine Falcone and the Riddler to the scene. The Riddler becomes Bruce Wayne's main antagonist in "The Batman". The film follows Bruce Wayne's second year as Batman. According to media reports, the new film is the start of a new Batman trilogy. The look of the Batmobile from the current film could indicate an American muscle car that is hidden under the bodywork and comes up with numerous weapons that are supposed to help Batman in the fight against evil. The design combines the Chevrolet Camaro from the 1960s with elements of the Ford Mustang and the Dodge Charger.

The label Jadatoys is known for having numerous Batmobiles from other movies in their portfolio in scale 1:24. Movie fans can choose from this collector's edition and put the vehicles from their favourite movies into the showcases. Many of the models are also available in our shop. Due to their top price-performance ratio, an impressive collection can be realized at fair prices. Placed in the living room, you can admire the models while watching the accompanying film. 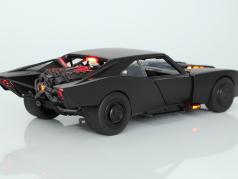 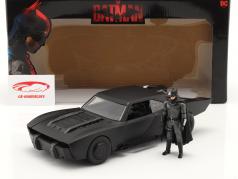