The Safety-Car in the Formula 1 became color. For over two decades, the several Safety-Cars from the house of Mercedes moved out in elegant silver, to bring the field together when there is danger. In the last seasons, the design became more colourful and more noticeable. 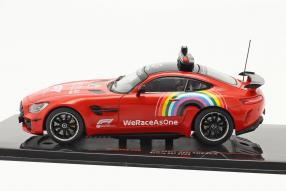 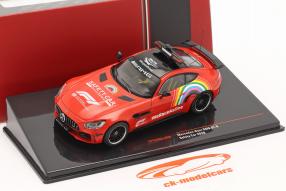 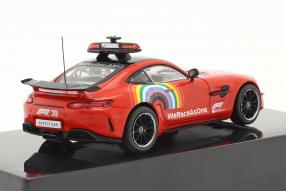 Since 2021, the company from Stuttgart has even shared the position of Safety-Car partner with Aston Martin. While the Aston appears in green, the Mercedes-AMG GT-R wears a striking red and the logos of Crowdstrike, a sponsor of the Mercedes Formula 1 team.

However, the unusual red of the Mercedes Safety-Car made its debut in the previous season of 2020 on a very special occasion - the 1,000th. Formula 1 racing by Ferrari at the Grand Prix of Tuscany. For the anniversary on their home track in Mugello, Ferrari not only gave its SF1000 a darker red. Mercedes also wrapped its Safety-Car in the strong red for the first time in Ferrari's honor. The lettering and rainbow logo of the Formula 1 initiative “We Race As One“ decorate the GT-R. These applications were also placed on the silver Safety-Car in the 2020 season.

The recently red Mercedes and his chauffeur Bernd Mayländer had plenty to do at the corona-related premiere of Formula 1 in Mugello. The Safety-Car was sent out onto the track three times - first after a collision on the starting lap, then after the controversial pile-up at the next restart and later again after a tire damage and Lance Stroll's departure at Racing Point. At the end of the race, Mercedes was in the lead even without a Safety-Car. Lewis Hamilton and Valtteri Bottas achieved a one-two result.

Ixo produced this special Safety-Car as a model, which adds a nice splash of color to many a Formula 1 model collections in scale 1:43. 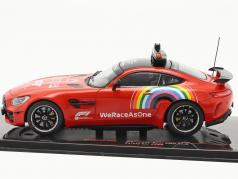 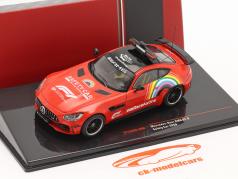