15.10.2021The Aston Martin DBS. The further development of the Aston Martin Vanquish and James Bond's company car in "Casino Royale" and "Quantum of Solace"

Aston Martin DBS in 1:18 by AutoWorld from the movie Quantum of Solace 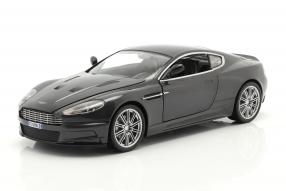 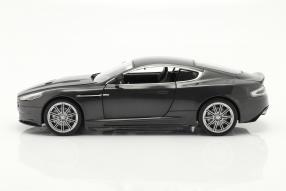 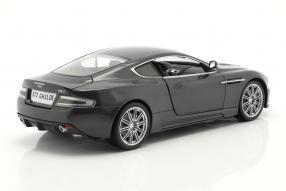 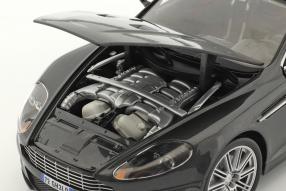 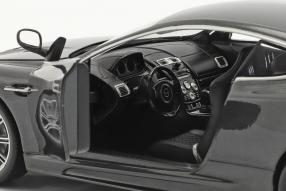 The Aston Martin DBS offers more luxury and sportiness compared to its predecessor, the Vanquish. The movie car from James Bond is kept very close to series production besides a further glove box with emergency items. The DBS was presented as series model shortly after the movie premiere back then. A total of 6 DBS were used to shoot the film “Quantum of Solace”. The model in scale 1:18 from AutoWorld has an interior that is true to the original and a detailed engine compartment. The doors, the hood and the trunk of the model can be opened. The quality of the AutoArt model is as usual of high quality.

You could almost say that James Bond is Aston Martin. James Bond drives Aston Martin in over 10 films, of which there are currently over 20 films. As early as 1964, Sean Connery drove an Aston Martin DB5 for the first time in “Goldfinger”. Likewise a year later in “Fireball”, in which the DB5 of the previous year was equipped with additional water cannons. Bond actor George Lazenby drives an Aston Martin DBS in "On Her Majesty's Secret Service" in 1969 before the British premium brand quieter for a few years. It wasn't until 1987 that an Aston hit the cinemas again with actor Timothy Dalton in “The Living Daylight”, in the form of the Aston Martin V8 Volante. After another and even longer break, Pierce Brosnan, who drives an Aston Martin Vanquish in "Die Another Day" in 2002, drives into an era that has remained unbroken to this day. Daniel Craig, who made his debut as a Bond actor in "Casino Royale" 4 years later in 2006, has been driving in all parts of the Aston Martin series since then.

The model designation DBS exists at Aston Martin already since 1967. Until 1972, the then DBS was built, which was powered at times by a in-line six-cylinder and later by a V8 engine. In spring 2008, the new DBS came at the same time with the film "Quantum of Solace". The basic price for the sports car, which is now powered by a V12 engine, was around € 250,000 in Germany. In addition to the coupe, the DBS has also been available as a convertible in the "Volante" version since 2009. 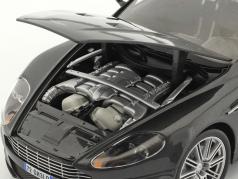 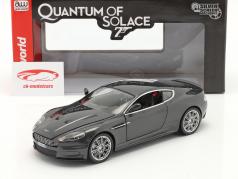