Sunday as Saturday. The KÜS Team75 Bernhard could finish both races with just one car. The sister car had to end the race early on both Saturday and Sunday. 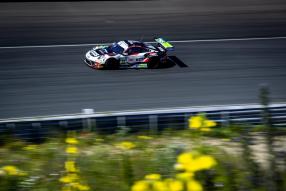 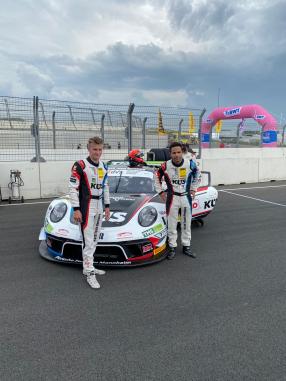 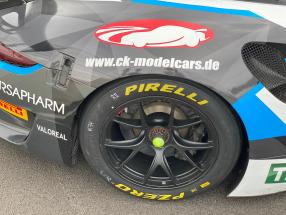 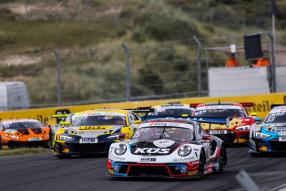 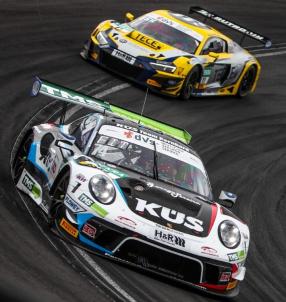 The Saturday race in the ADAC GT Masters, the international German GT championship, brought to a failure with no fault of their own and a remarkable chase to catch up for the KÜS Team Bernhard: the reigning champion Christian Engelhart (34, Starnberg) and Porsche works driver Thomas Preining (22, Austria) had to to give up in the 911 GT3 R with the starting number 75 after the heavy bump of a competitor, the sister car with starting number 74 under Jannes Fittje (21, from Langenhain) and Dylan Pereira (23, from Luxembourg) made it into the points with 14th place. The qualifying in the “League of Super Sports Cars” was disappointing for the team from Landstuhl. The first time chase of the two Bernhard Porsches was interrupted by the red flag, the second “red” shortly before the end brought the meeting to an early end. Christian only had 14th place, Jannes got it worse, he was only 25th. “Thanks” to a starting place penalty from Friday practice, he even had to start the race from the back row of the 27-car field.

Immediately after the start there was a safety car phase, at which Christian was already in eleventh place, which he was able to hold until the mandatory pit stop. Thomas took over, but was hit hard by a competitor after a few minutes and had to give up shortly afterwards with a damaged car at the pits. Jannes had already worked his way up to 17th place by the start of the pit stop series, so points were within reach. After his stint, Dylan was able to cross the finish line in 14th place in the points.

#75
Christian Engelhart: “Unfortunately we didn't get any points today. We started from 14th place, I got off to a good start and made a bit of progress in my stint. But then an Audi cleared us away after the pit stop and damaged our car so badly that we couldn't continue. Very annoying. Tomorrow is a new day. Then we do our best again and see that we bring home a good result.“

The Sunday race of the ADAC GT Masters, the International German GT Championship in Zandvoort in the Netherlands, was almost like the Saturday race for the KÜS Team75 Bernhard: On the North Sea beach, the Porsche 911 GT3 R with the starting number 75 under works drivers Thomas Preining and Christian Engelhart was not able to finish the race like on Saturday. In the sister car with the starting number 74, Jannes Fittje and Dylan Pereira achieved twelfth place after another remarkable race to catch up in the “League of Super Sports Cars”, in which 13 positions were made up.

Qualifying, which was interrupted again with a red flag, went anything but ideal for the team from Landstuhl. Porsche works driver Thomas Preining was in position 17, Dylan Pereira couldn't get past 25th after a high-speed spin. In the race, Thomas quickly made up a few positions, was in 15th place shortly before half-time and was thus in the points. But before the mandatory pit stop, he had to park the car with a defect. Christian was no longer used at all, the second zero for #75 this weekend. In the sister car, Dylan also worked his way forward quickly, when the pit stop window opened, he was in 19th place. Jannes took over, made up a few positions, benefited in the end from failures by the competition and came home in twelfth place as the best Porsche.

#74
Dylan Pereira: “The start was very good, I was able to drive from 25th to 19th, so I'm very happy with that. After that I was able to maintain the pace, but overtaking is known to be difficult here at Zandvoort. We made up a few places at the pit stop. Jannes was able to defend his position very well in his stint and made even better progress through the mistakes of competitors. We are the best Porsche in twelfth place. I think we couldn't have expected more."

Team boss Timo Bernhard: “With our #74 we were the best-placed Porsche today. The guys drove a clean race. Unfortunately, Dylan screwed up his qualification early on with the spin, after which the tires were no longer good. So the result was okay. With our #75 we were in a good position for a single-digit result before we had to give up.“

Here: Click to the modelcars of the ADAC GT Masters from the previous years