The team of ck-modelcars.de couldn&#039;t ask for any better on Throwback Thursday: The modelcars to the VW T1 Samba 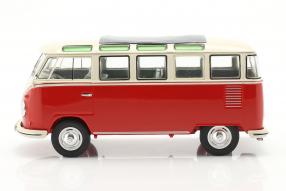 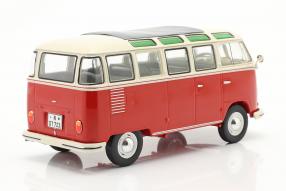 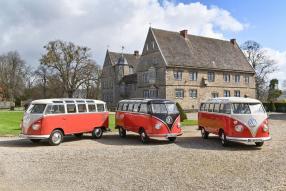 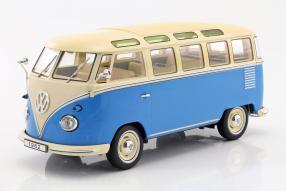 The editorial team of ck-modelcars.de looks back to the world premiere of the Volkswagen T1 in a special body version on today's Throwback Thursday: Exactly 70 years ago, a noble eight-seater minibus was presented at the first post-war IAA in Frankfurt and was simply referred to as a special version. Today this VW bus is world-famous and particularly sought-after under the name "Samba". For many people, the samba is the culmination of the Bulli cult and is still seen today as a symbol of the hippie culture. But it was a popular minibus long before the Flower Power generation: Series production of this special VW began on June 27th, 1951 and ended in July 1967 after almost 100,000 units had been built. Certainly there have been more modelcars: Even today they are an integral part of the range.

So let's look back: The IAA opened its doors again for the first time since the war. Volkswagen took this opportunity and presented the new vehicles on a breathtaking, 1,350 m^2 booth, where parts of the Beetle's assembly line were recreated and this show was supplemented by an unprecedented, almost surreal light installation that visitors could see in pulled the spell. In the media, the exhibition stand was even elevated to the status of the “Temple of the Volkswagen”. His concept became trend-setting for future exhibitions. And in this context, the world premiere of the new people carrier, which Volkswagen simply called VW minibus "special version" when it went on sale, took place. The differences to the conventional station wagon were anything but unadorned, which most modelcars prove.

For an initial surcharge of almost DM 3,000, the customer received an exclusive bouquet of additional equipment: the exterior of the noble van shone in a harmonious two-tone paintwork with attractive aluminum decorative strips and a front bumper. The total length of the decorative strips brought it to a length of 1,112 centimeters! The all-round glazing with the so-called skylights, which was previously only known in the bus sector, turned the Bulli with 23 windows into a “glass viewing bus”. In addition, a large folding sunroof was also available, which gives the passengers in the rear the feeling of sitting in a convertible. You can hardly be closer to nature when traveling - then and certainly nowadays. The noble interior with covered side panels and chrome regalia created a luxurious ambience in the interior.

The appropriate musical entertainment for the small tour company can be provided on request from a tube radio (Auto-Super model) in the dashboard. In the USA this vehicle was also marketed as the Microbus Deluxe. In Germany, however, people remain modest with the special version or, from 1952, the equally unemotional name special model. However, the customer himself took care of a cooler name very quickly, even if the exact derivation is unfortunately no longer exactly traceable today. Samba could have been derived from a sunroof version with a special dashboard or a special version with special equipment. At the time, it wouldn't be absurd, of course, if it were based on the dance that seemed so exotic at the time and brought joy to life. But it wasn't just popular saying that the luxury Bulli was called that.

In 1954 it was officially called Samba in the Dutch price list. The oldest known samba is privately owned by a collector in the Rhineland (Germany). Almost its entire history can be documented. The owner even still has the original invoice. Compared to today's market prices, at a value of 9,025.00 DM it almost seems like a gift; This, however, with an annual average wage of only DM 3,579.00. The Samba Bullis are currently more in demand than ever, which is often reflected in the prices. In recent years, models in top condition have repeatedly fetched dizzying top prices at auctions. The highest price achieved so far for a Samba is USD 302,500.00; Realized in 2017 at the Barrett-Jackson auction house). The miniatures, mostly made of diecast, remain coveted, but still cheaper.

Here: Click to the modelcars of the Samba bus

The paintwork was almost always two-tone

It was only available with moldings

He always had a clock on the dashboard

With the option M 130 omission of skylights and sunroof ex works, this equipment was omitted

A Samba from the period August 1963 to July 1967 is a so-called 21 window - the corner windows are no longer needed due to the new, wider tailgate