The Tyrrell Racing Organisation Ltd. shaped what happened in the Formula 1 at the Grand Prix of the years 1970 to 1998. Spark and Minichamps remind of this 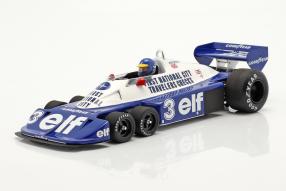 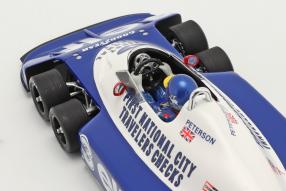 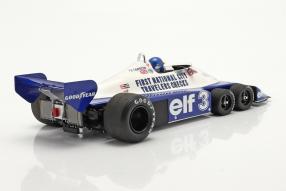 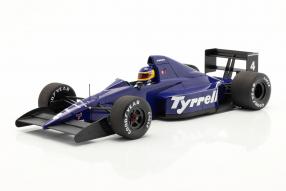 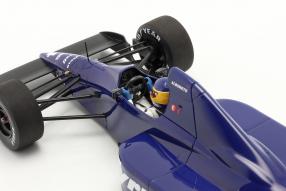 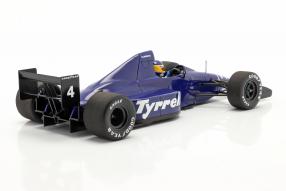 Ken Tyrrell remain unforgettable: die-hard fans of the Formula 1 will always remember the cars of Ken Tyrrell, when seeing the current black painted silver-arrows from the house of Mercedes-AMG Petronas F1 of the seven-time world champion Lewis Hamilton and Valtteri Bottas on Sunday by Sunday. Even if it sounds unbelievable today: The racing cars that were used by the British lumberjack Ken Tyrrell and his racing team Tyrrell Racing Organization Ltd. in Formula 1 from 1970 to 1998, are so to say the forerunners and ancestors of the current vehicles from Hamilton and Bottas. Spark and Minichamps remember this fact with the modelcars of the famous "six wheeler", the Tyrrell P34 from 1977 and the Tyrrell 018 from the 1989 Formula 1 season, each made in sacle 1:18.

To refresh the memory: The team of the gnarled Englishman - winner of one driver and two constructor titles - was bought by the tobacco company BAT, renamed British American Racing and thus in 1999 the successor to the Tyrrell Racing Organization. In 2005, the Honda factory team arose from this, which was taken over by Ross Brawn in 2009 and unexpectedly won the world championship with Jenson Button in the same year under the name Brawn GP; since the season 2010 on the road as Team Mercedes Grand Prix. Ken Tyrrell's son Bob was responsible for marketing and looking after sponsors under his father, who was very influential in F1. The Englishman is still the license holder and giver of the brand name Tyrrell and is therefore still a contact person for the modelcar industry, for example.

And the industry has not forgotten the name of the sometimes quite creative racing time: The Tyrrell P34 with its six wheels attracted attention up from the Spanish Grand Prix 1976 and was in use until the race in Japan 1977. Tyrrell chose this solution to reduce drag in the front. Two ten-inch front wheels were the right solution for this approach, but they cost traction. That led to the installation of two pairs: The "six wheeler" was born, because the small wheels at the front were supplemented by a normal-sized pair of wheels at the rear. At the Swedish Grand Prix 1976, the visually impressive concept achieved a double victory: Jody Scheckter won. In total, the car, powered by a Ford Cosworth DFV 3.0 V8 engine, achieved 85 points and 14 places on the podium after 30 starts. Spark now brings a model to it.

The modelcars that appeared under the item number 18S472 in format 1:18 reproduce the Tyrrell P34 in the configuration with which Ronnie Peterson had competed at the Brazilian Grand Prix of the Formula 1 1977. The resine-miniatures with starting number 3 impress with the highest level of precision in the reproduction of cladding, the cockpit and the wheels. The appearance is perfect. Peterson had finished the race in lap 12 due to an accident. The Tyrrell 018 did it better, with which the Team Tyrrell had started at the Grand Prix of Mexico in the Formula 1 in 1989. The conventionally constructed vehicle finished the race under Michele Alboreto in third place. Minichamps has presented miniatures (110890304) limited to a number of 220 pieces, which, in contrast to the Tyrrell P34, are built from diecast. Keep this in mind when you watch Hamilton and Bottas the next time.

Here: Click to the modelcars of the topic Tyrrell