Minichamps is the manufacturer of the limited to 222 pieces nine-eleven, which is exclusively available at ck-modelcars.de 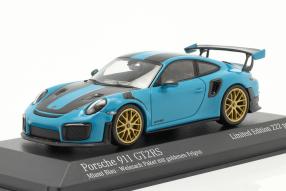 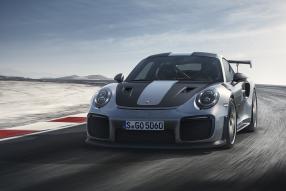 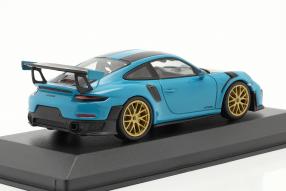 Ck-modelcars.de recalls the super sports car Porsche 911 GT2 RS of the series 991 II in the series Faszinatoin Sports car with modelcars in scale 1:43 from Minichamps. The miniatures that are painted in miami blue are produced from diecast and appear with golden rims in contrast to previous editions of this sample. Minichamps can be seen as an absolute specialist for the reduction of the Porsche 911, because its roundings are exactly transferred to the models. This is a challenge for mold construction engineers, as its known in the industry. But they have what it takes as one can see with the appearance of the modelcars, available under item number 413067235! Let's take the opportunity and look at the key data of the vehicle.

With the 911 GT2 RS 2018, Porsche set a record for street-legal sports cars on the 20.6 kilometer long Nürburgring-Nordschleife. With this, the car manufacturer comes closer to the record of Stefan Bellof and his 6:11,13 minutes in the same place, who, however, drove in a Porsche 956 in 1983, but with almost equally motorization. The achieved best time of the GT2 RS with 6:47,3 minutes on September 20th, 2017, and in the presence of a notary, exceeded even internal expectations, says Frank-Steffen Walliser, Head of Motorsport and GT-vehicles. The car celebrated its world premiere at the end of June 2017 at the Festival of Speed in Goodwood. Its heart is a six-cylinder biturbo boxer engine with 515 kW / 700 hp. This accelerates the fully fueled 1,470 kilogram rear-wheel drive car in 2.8 seconds from 0 to 100. Top speed: 340.

By the way, the models show off the Weissach-Package. With this optionally available additional equipment, the drive behavior of the nine-eleven can be optimized. Amongst other things, it includes stabilizers and coupling rods in the front and rear out of carbon fiber reinforced plastic, which reduces the unsprung weight. Further, it has a light-weight roof of visible carbon, a front hood of the same material, a screwed titanium roll cage as well as exterior mirrors with upper shells also in visible carbon. Together with the also optional magnesium wheels, the weight of the 911 GT2 RS decreases by 30 kilograms, accordingly to Porsche. These details have also been worked out perfectly by Minichamps and ck-modelcars.de, which makes the miniatures even more attractive besides the absolute limitation.

Here: Click to the modelcars of the Porsche 911 GT2 RS