An impressively good model car is reminiscent of the great times of the Silver Arrows, in which Manfred von Brauchitsch won the Eifel race in 1934 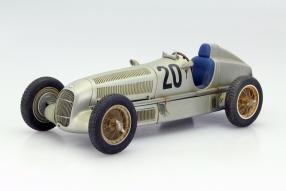 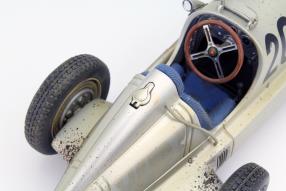 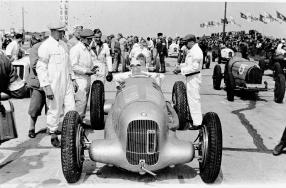 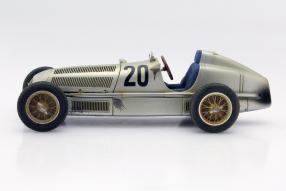 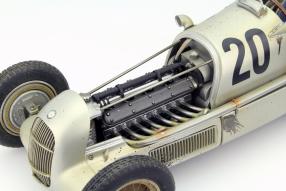 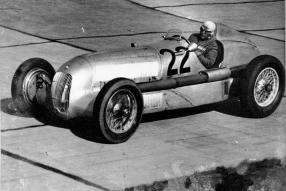 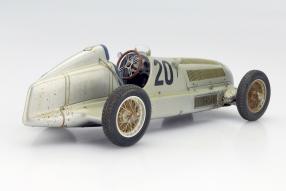 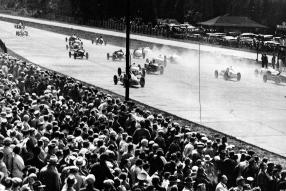 When writing the lower line and the use of the words "great times" strikes me that is spoken in relation to the past again and again of the glorious years of the Silver Arrows. But considering the fact that Lewis Hamilton just for the 3rd time drivers champion and the new edition of the works team of Mercedes-Benz for the 2nd time constructors' champion of the current Formula 1 was, we're right in the middle in the great times of the Silver Arrows, or? Especially as Nico Rosberg has become vice-world champion yesterday.

The model AutoLabel CMC but puts us back once again in the past and presented the model car fans to the last detail perfectly successful model of the Mercedes-Benz W 25; a race car, which the manufacturer wanted to participate in the so-called 750-kilogram formula and who won in 1934 with Manfred von Brauchitsch at first the Eifel race at the Nürburgring.

The birth of the Silver Arrows

It is a first in glittering silver, and it ends with shiny gold: The first race of the Mercedes-Benz W 25 racing car newly developed on 03 June 1934 on the Nürburgring won Manfred von Brauchitsch with an average speed of 122.5 kilometers per hour - a new course record. Nearly the victory, however, overshadowed by the sensation that the new Mercedes-Benz racing car with shiny silver aluminum body instead of the classic racing White goes to the start.

According to legend, the metallic luster skin has been exposed until the night before the race by grinding the paint to bring the starting weight of W 25 within the limits of the regulations. From this birth of the Mercedes-Benz Silver Arrows created in the following years a fascinating tradition of great motorsport successes.

Rennabteilung tight - comeback in the Eifel

The International Eifel Race is the debut race of the new, developed since 1933 for 750 kg formula Mercedes-Benz W 25 unemployment and economic crisis - 1932 was not a favorable background for motorsport activities in Germany. Even the factory racing department of Mercedes-Benz, whose supercharged touring cars of the types K, S, SS, SSK and SSKL have motorsports in Europe dominated the late 1920s and early 1930s is tight. You have to imagine this: To look at a car factory racing department as Mercedes-Benz. But it matured a perspective for the future: In the fall of 1932, the motorsports authority AIACR gave (Association Internationale des Automobile Clubs Reconnus) in Paris a new formula for the grand prix racing announced that entered into force 1934th

The car could be a maximum of 750 kilograms without fuel, oil, coolant and without tire, in addition to designers were no limits. Mercedes-Benz decided in 1933, for the new formula to develop a completely new racing car and this entrusting to drivers of Brauchitsch, Rudolf Caracciola, Luigi Fagioli, Hanns Geier and Ernst Henne.

The AIACR intention with the 750-kilogram formula the speeds of the cars compared to previous generation limit: The governing body apparently have assumed that in a light vehicle only small motors can be fitted with low power. But the officials have underestimated the progress of technology: for the new formula developed in Stuttgart W 25 turned out to be an exceedingly powerful race cars.

Compared with the mid-engined cars of Auto Union seemed the W 25 designed relatively conservative with its front engine. But the combination of a slim body, the mechanically supercharged 3.4-liter in-line eight-cylinder engine, independently suspended wheels and gears directly on the rear axle formed the basis of many successes. This was already evident in the first test runs in February 1934 in Monza and on the highway between Milan and Varese.

Motorsport - Event for the masses

Manfred von Brauchitsch recalls in his 1964 published memoirs "Without struggle, no victory" in the stream of spectators who flocked to the Nürburgring: "Many special trains brought people in the small Eifel town Adenau thousands of motorcycles, buses and trucks snaked on. Highway to the Nürburgring. From Frankfurt, Dusseldorf and Cologne, from across the Ruhr area, from Munich, Hamburg and Berlin people flocked to the highly anticipated battle of the motors in the Eifel. In addition to the curves on Hatzenbach, the carousel, the Fuchsröhre, in Valley Wehrseifen or on the dovetail many camped already the night before and secured a good place. " Well, that's today at the major events on the ring - as the Nürburgring is affectionately known - no different.

In the afternoon around 15:00 clock clock, the start flag lowered to Eifelrennen 1934. Planned start of the race car is actually 2 hours earlier, following runs for motorcycles. But because of bad weather the competition of racing car starts late. Mercedes-Benz is represented with 2 vehicles: From Brauchitsch has the starting number 20; with the race car # 22 starts Fagioli. Overall, there is a field of 44 participants. Fagioli and von Brauchitsch set to W 25 an early lead, followed by Hans Stuck (Auto Union) and Louis Chiron (Alfa Romeo). After Fagioli in the 14th round - the penultimate - fails, travels von Brauchitsch victory for Mercedes-Benz to the finish, followed by stucco and Chiron. A success to which recalls the model of CMC in an unparalleled high quality; it's almost as if he-like the cheers of 200,000 fans.