From diecast and in a first class quality, the collector now receives the opportunity to extend his starting field of the 24 Hours of Le Mans 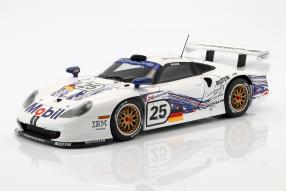 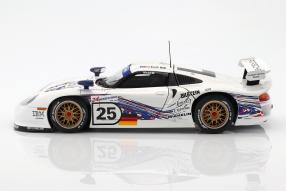 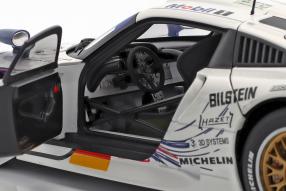 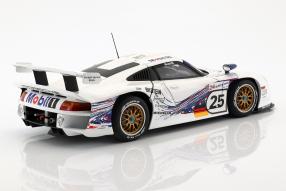 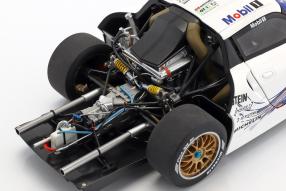 They seem like they won the 65th version of the 24 Hours of Le Mans. The modelcars with the starting numbers 25 and 26! Autoart has put real winners on the wheels with the miniatures of the Porsche 911 GT1, which offer the collectors a first-class insight into the technology of the prototypes used by the Porsche AG in Le Mans in 1997. However: The trip to the Sarthe did not end well for the role models. The 25 with the drivers Hans-Joachim Stuck from Germany, Thierry Boutsen from Belgium and Bob Wollek from France had to give up after 238; Stuck's countryman Ralf Kelleners and the two Frenchmen Emmanuel Collard and Yannick Dalmas on No. 26 after 327 laps, who achieved 18th place, the pole position in the list of the failed. After 361 laps, the winner was the TWR-Porsche WSC-95 from Joest Racing.

That the car by Joest Racing from the LMP class would win for second time in a row, however, could not have been foreseen. Quite the reverse! It seemed as the role models of our modelcars would win Le Mans 1997. It was Bob Wollek, who started the bad luck weekend on Sunday: With his accident in the Arnage, he irreparably damaged the Porsche 911 GT1, so that the Stuttgart hopes were at No. 26, which comfortably led the overall standings. However, hot engine oil, which ran out on the way to the Indianapolis and set the plastic body on fire, stopped the possible victory journey: While Ralf Kelleners was able to get to safety, the rear car flared in front of around 170,000 spectators of the race. That was it: Is that the reason why there are no pictures of these cars in the Porsche database?

Just 17 of the 48 started cars in three categories had been rated. The weather was dry and warm in summer. We are also warmed to the heart when we look at the modelcars from Autoart - own spelling AUTOart - in their incomparably strong construction. The coherence of the design is impressive, but the details under the skin trigger enthusiasm in us: The front cover is also removable as the one of the rear. At the front we can see the suspension parts, at the rear the miniature of the six-cylinder-biturbo reveals itself to the collector, which developed in the 1997 version 911 Evo 1 400 kW / 544 hp; and delivered 600 Newton meters (Nm) of maximum torque to the rear wheel drive via six speed manual transmission. Ok, it did not went well in 19978, but after 19 victories in Le Mans you can get over it, right, dear Porscheans?

Here: Click to the modelcars of the Porsche 911 GT1