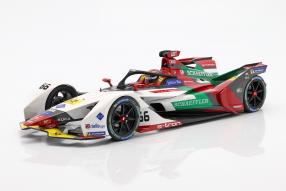 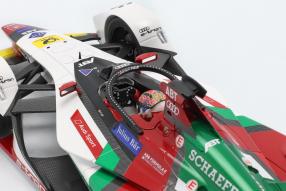 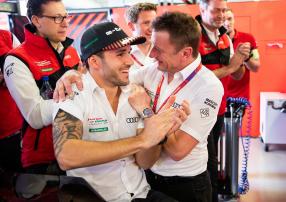 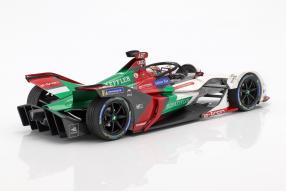 The team from Minichamps received the licens for the production of modelcars to the new season of the Formula E, but also reappraises the so-called season 5. The racing cars from Lucas di Grassi and Daniel Abt can be found in the delivery of the past week. Not however in the familiar scale 1:43, but in the size 1:18, but here also produced of diecast. Di Grassi's vehicle from the type Audi Sport ABT Schaeffler Formula E Team FE05 of the season 2018/19 is available under the designation 11418001; the vehicle of Daniel Abt from Kempten under the item number 114180066. Both drivers have also found their way into the format of 1:18 in form of a driver figure; they should be satisfied with the miniatures in any case, because the models meet the high standards in form and finish that we already know from the Formula 1.

Minichamps sets the standards here and there, so in the Formula 1 as well as in the Formula E. The label from Aachen is currently much further ahead than Daniel Abt himself, because he had a heavy accident with the following vehicle for the season 2019/20 at the Mexico City Eprix, to which he comments in his video blog embedded above. The 26 year old crashed with 200 kilometers per hour into a line boundary. The vehicle continued rolling despite applying the break. The practice was interruppted. After examinations including ECG and MRI it turned out that the Bavarian had got off lightly with servere bruises, aching muscles and one or two displaced vertabrae. He actually had a real guardian angel, because two sensors have messured a load of 21 G or 29 G. A force that caused the chassis to break.

"The leg would have been of 20, 30 years ago", said Daniel Abt, who celebrated its first victory of the Formula E in the Autódromo Hermanos Rodríguez in Mexico City 2018. For the team spirit, he entered the cockpit for the race, but stopped in the final phase: "It was clear from the start that I would stop the race if I didn't feel well!" He wanted to waive his role as an influencer the days after and continue to be looked after by doctors in Germany. A good approach, because as mentioned at the beginning, not only will the next race in Marrakesh take place on February 29th, but the run in Rome, Italy, will take place on March 4th. Quote Daniel Abt: "Until then, I want to be in top shape again." We wish Daniel Abt good luck and get well soon, and have fun with the excellently made miniatures from Minichamps. which were also delivered.

Here: Click to the new Formula E modelcars in 1:18