NZG has now also implemented the flagship in scale 1:18 of the facelift introduced in September 2018 and delivers excellent modelcars with it 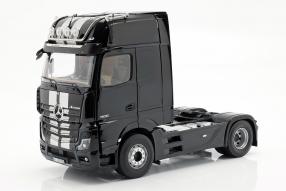 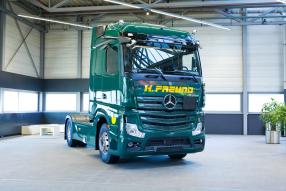 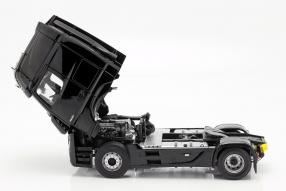 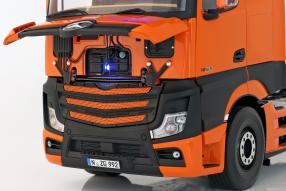 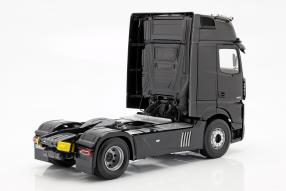 Truck models in scale 1:18 - Is there a more fascinating expansion of a collection to the topic Mercedes-Benz? We don't thing so and dive with full of zeal into a blog article, which wants to present you the newest modelcars from NZG. In time for the IAA commercial vehicles, which took place in Hannover from September 20th to 27th, 2018, the car manufacturer has presented the new flagship of Mercedes-Benz Trucks in the Premiere Night to the national-press in Berlin. NZG has incorporated the significant changes into its production and shows again a great model of the truck Actros GigaSpace 4x2: To the faithful interior, the model builder adds the detailed engine, steerable front wheels, an openable service-lid, tiltable cab and of course openable doors.

And this with fantastic key figures: The miniatures of zinc diecast next to plastic parts measures a total length of 34 centimeters, in width 17 cm and in hight 22 cm. The weight of the model is respectable 4,2 kilograms. For comparison: A Mercedes-Benz SLS AMG Roadster in 1:18 from Minichamps brings only 850 grams on the scales. So the miniatures from the NZG Actros weigh almost five times as much as an open SLS! The collector has something from that! And what else is there? A new concept in the rearview mirror, the already known from the predecessor, illuminated Mercedes star and the cab with adjustable armrests with lighting and a lock on the saddle coupling. The chassis is sprung; two brake wedges are included. The battery for the lighting is also included!

The collector receives much value for his money. The fact that the proportions and the appearance of the lines are perfectly in line with the design of the prototype, that beads and shapes are correctly reproduced - that is self-evident at NZG as a specialist for commercial vehicle miniatures. Inside, too, the mold makers exercised the utmost care and perfectly reproduced every detail of the cockpit. What is missing, of course, are the new features of the prototype: Mercedes-Benz Trucks offers, for example, an introduction to automated driving. a new Active Drive Assist that can brake, accelerate and steer. According to the manufacturer, the system offers partially automated driving not only in partial but in all speed ranges. Aerodynamic improvements are achieved thanks to MirrorCam and new end edge flaps.

The new Actros should have reduced its consumption compared to its predecessor and savings of up to three percent on highways and even up to 5 percent in overland trasport. According to the company, the intelligent cruise control and transmission control system Predictive Powertrain Control (PPC) is significantly more efficient and can now also be used on overland routes thanks to expanded maps. In addition, new fuel-saving rear axle transmissions are used. What is new is that the Active Brake Assist 5 works with a combination of radar and camera system. This allows the system to better monitor the space in front of the vehicle and to better respond to people, which also helps to prevent accidents when turning right with cyclists. Our conclusion: great role model, great model!