As a start of a new calendar, the people from Stuttgart introduced a 911 top version, which has an important position in the market as a modelcar 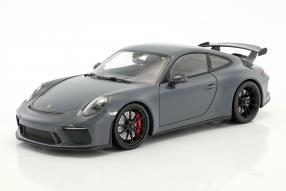 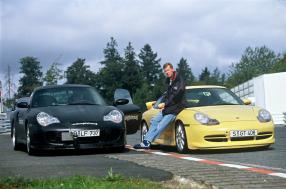 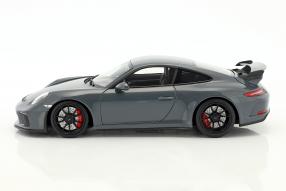 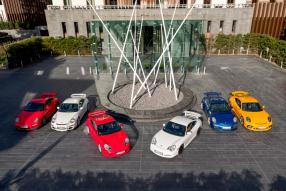 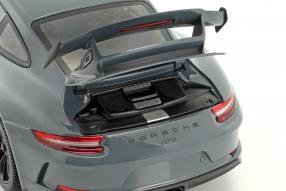 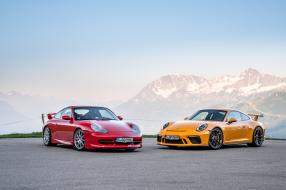 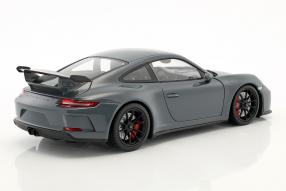 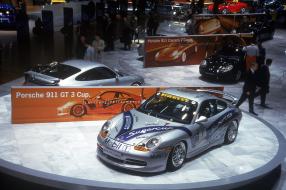 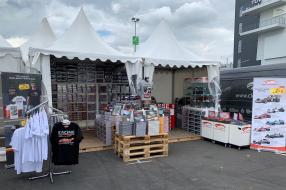 For the weekend of the Oldtimer Gran Prix at the Nürburgring we actually have the right, really matching content in our blog: We celebrate the birthday of the Porsche 911 GT3, which should revolutionize the sports car and motor sports scene 20 years ago! With the revelation of the first Porsche 911 GT3 in March 1999 at the Geneva Motorshow, a new era had started for sophisticated sports car drivers. It is the basis of many versions of the nine eleven, which we meet on the street and the race track: With or without additional shortcuts as RS or R, the street legal sports car became with every generation faster, more precise and dynamic - and naturally aspirated, with manual transmission and with rear wheel drive the dearest Porsche 911 of all purists. And because of its variety of its variants, one of the most important role models at the modelcars!

Let's look back: Like no other Porsche 911, the GT3 wore the handwriting of the racing department at Porsche. Developed by the two-times rally-world champion Walter Röhrl, racing engineer Roland Kussmaul and the Porsche-motorsports-specialists from Weissach, the Porsche 911 GT3 brought racing-friendly agility on the road. With its highly developed racing technology, the new GT3 continued that tradition just before the beginning of the new millennium, which started in the 1970s with the legendary Porsche 911 Carrera RS 2.7. For the first time, the model became not the designation "RS" for racing sport, but the name GT3 - a reference to the GT-Class, in which the motorsports version of the model should drive. The water-cooled 3.6 six-cylinder-boxer-engine of the new sports car produced 365 kW / 360 hp.

So it was not really surprising that the Porsche 911 GT3 earned its first laurels before the premiere in Geneva: With Walter Röhrl on the steering wheel, he raced the 20,8 kilometer of the long Nordschleife at the Nürburgring in less than eight minutes - und submitted with it a new benchmark for street sports cars. However, such exceptional performances were not only made possible by the race-proven boxer engine, but also because of a finely tuned overall package: The suspension was lowered by around 30 millimeter, the brakes amplified. The six-speed-gearbox came from the Porsche 911 GT2. Gearbox grading, axle geometry, stabilizers and springs could be adjusted depending on the track characteristics. Lightweight construction came before comfort. Distinctive mark of its racing sports origin was the fixed rear wing.

Whoever wanted, could order his 911 GT3 also in the Clubsport version, amongst other things with screwed rolecage. From May 1999, the first models of the Porsche 911 GT3 left the production in Weissach. As a homologation basis for motorsport, the new model also formed the basis of the successful 911 GT3 Cup and the above-ground racing versions 911 GT3 R and GT3 RSR, which should achieve great success in brand and GT sports in the coming years. In addition to countless class victories, the GT3 scored numerous overall victories in the major endurance races, including the 24 Hours of Spa, the 24 Hours of Daytona and the 24 Hours of the Nürburgring, which he has won seven times since 2000. Something that is also a nice occasion for our partner Timo Bernhard: In 2003 he won the Porsche 911 GT3 RS in Daytona.

It belongs to the recipe for success of the Porsche 911 GT3 that the experience and innovations of the motorsport are always included in the development of the next street version. No wonder that about 80 percent of all produced 911 GT3 are raced regularly on the race track. After the great success of the first edition, Porsche presents every three to four years a new evolution stage of the street sports car. In 2003 the power of the boxer engine climbed with the use of the stepless camshaft adjustment VarioCam up to 280 kW / 381 hp. By request one could now order the GT3 with especially powerful Porsche Ceramic composite Brake PCCB. Three years later, the next performance leaps followed with 305 kW / 415 hp. For the first time, the Porsche 911 GT3 was equipped with the Porsche Active Suspension Management PASM, an active suspension.

In 2009, the engineers lifted the capacity of the six-cylinder-boxer-engine up to 3.8 liters and with it the performance to 320 kW / 435 hp. The completely new designed rear wing and a fully clad underbody increased the output so sustainable that the contact pressure was more than doubled in comparison to its predecessor. To the 50th anniversary of the Porsche 911, the fith generation of the 911 GT3 celebrated its world premiere at the Geneva Motorshow in 2013. Engine and transmission, body and suspension were completely new. The drive consited of a 3.8 liter naturally aspirated engine with 350 kW / 475 hp, connected for the first time with a Porsche PDK Double Clutch. In addition - also as a premiere - came an active rear axle steering. To the debut, the new 911 GT3 raced the Nordschleife of the Nürburgring in just 7:25 minutes - more than half a minute faster than the first 911 GT3 1999.

The 911 GT3 reached tts most recent expansion stage in the year 2017, to which Minichamps not only presents a perfect model in scale 1:18 for the collectors; under the item number 113067033 in the colors graphit blue metallic, but also only available exclusively at ck-modelcars in an edition of 222 pieces. At the center of the new development, the six-cylinder boxer engine had confessed, whose capacity grew up to 4.0 liters and comes to an output of 368 kW / 500 hp. Porsche keeps two attractive versions ready for purists: On the one hand, there is a alternative manual six-speed gearbox available beside the PDK. And on the other hand, the 911 GT3 is alsoavailable with a decent Touring-Package, in which amongst other things, the fixed rear wing is replaced by an automatically extending spoiler. So 20 years 911 GT3? We bet that there will be 20 more! You too?

Click here to all modelcars of the Porsche 911 GT3

Here: Click to the limited model in graphit blue