With beautiful miniatures in format 1:43, the small series label from Italy spoils the fan base around the sports cars from Maranello 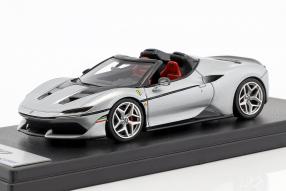 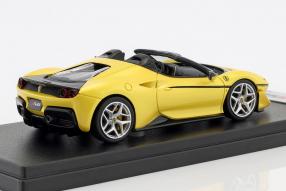 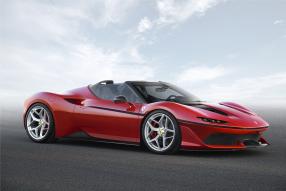 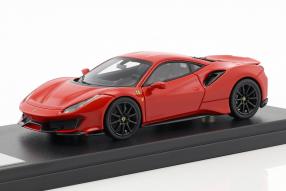 The advantage of a small series label such as Looksmart is that it can build and sell economically viable modelcars from rare models of which only a few have been built; often these are produces out of polyurethan-cast resin, because the processing of this material compared to zinc diecasting makes lower demands on mold making. Looksmart - ownspelling LookSmart - is so in a happy situation to deliver the miniatures of the Ferrari J50. For all of those who don't know about the shorthand symbol, following note: The J50 roadster is a special edition, which should remember to the market start of Ferrari in Japan, was presented in 2016 and refers with the "J" in the name to the land of the raising sun. The J50 is not a complete new development, rather an evolution model of the 488.

Also on this, the Ferrari 488 Pista, Looksmart delivered novelties in different colors in the past week. But before we get to that, we'll stick to the J50's models. The 50 in the designation stands for the number of years that the Italian sports car maker is present in the island nation. For this reason, the special model for the road has been available only in Japan. The lines have been completely reworked and trimmed to an extreme wedge shape. The front with the front spoiler drawn far around the fenders and the slit-eyed headlights give the Ferrari in the prototype and in the modelcar a much more pronounced dynamic than the original version. The headlamps consist of a full-LED system with extremely thin headlamps that follow the curved shape of the bumper.

The modelcars in the scale 1:43 appeared under the item number LS485D in the color Nürburgring silver metallic, under LS485B in white liana and under LS485E in the eye-catching tristrato yellow. The miniature with the name LS485A recreates the sports car in tristrato red. By the way, modelcars of the Ferrari J50 have also appeared from BBR. All models make the J50 Roadster perfect from the last detail: The windscreen and the side windows of the J50 made Ferrari flatter and thus aerodynamically more efficient than the 488; but also to give the driver the feeling that he is "looking out of a helmet visor," according to the press department of Ferrari. Looksmart has carefully crafted the lines. The contrasting black air intakes on the front hood stand for a higher level of sportiness.

Approval to the F50

By the way, the Roadster reminds us of the Ferrari F50. The car has two cleverly disguised, very generously designed roll bars, which stand out behind the individual seats of the front seats. The roof of the prototype has to give up electrical support and be operated manually. The Ferrari J50 is powered by a 3.9 liter V8 twin turbo from the 488 Spider, but its power has been increased by 14 kW / 20 hp to 507 kW / 690 hp. The miniature models for the top model Ferrari 488 Pista mentioned in the introduction have been launched by LookSmart in the same good quality as well as in the colors Nürburgring silver (LS488B) and corsa red (LS488H). The Pista debuted at the Geneva Motor Show 2018, offering its drivers a whopping 530 kW / 720 hp, a top speed of 340 and accelerating to 100 in 2.85 seconds.