With a special edition to the toy fair 2019, the people from Aachen pick up the new clubsport-car that appeared for the anniversary of the Stuttgart brand 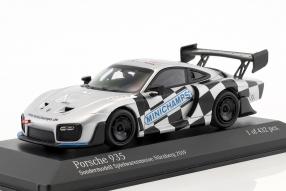 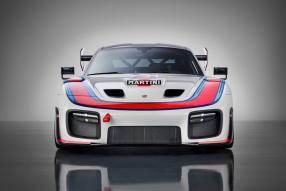 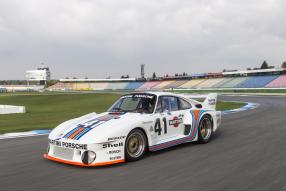 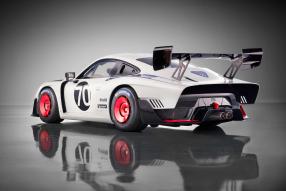 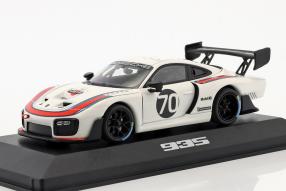 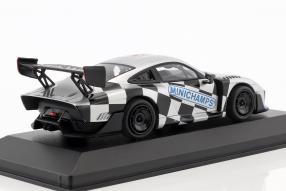 A Minichamps special model for the toy fair: The Aacheners follow this cherished tradition with a limited edition of 432 units Porsche 935 in silver painting and with the typical check flag pattern for this occasion. However, not on the basis of the Le Mans winner of 1976, but the new edition, which was presented last year at the historic motorsport event Rennsport Reunion at the Laguna Seca Raceway. The 515 KW / 700 HP strong racing car, whose body reminds of the legendary Porsche 935/78, is manufactured in a small series of 77 pieces. "This spectacular car is the birthday gift from Porsche Motorsport to fans around the world," said Dr. Frank-Steffen Walliser, head of Motorsport and GT-vehicles. Gift is relative though: the Stuttgarter call 835,318.12 Euros for it.

The technology of the race car for club sport events and private race track training is based on the high-performance sports car 911 GT2 RS. As in the historical model, large parts of the body have been replaced or supplemented by add-on parts made of carbon fiber composite material CFK. With its streamlined rear, the new Porsche 935 extends to a length of 4.87 meters. In width, the exclusive Clubsport racer measures 2.03 meters. "Since the car is not homologated, engineers and designers did not have to follow the usual rules and therefore could develop freely," says Walliser. The spectacular aerodynamics is a complete new development and a tribute to the Le Mans race car Porsche 935/78, which was called "Moby Dick" by the fans.

This designation, based on the white whale of Herman Melville, owes its name to the racing car of its elongated form, the massive widenings and the basic color white. Many details of the exterior of the new car cite successful vehicles from the in-house motorsport history: While the aerodynamically faired rims remain to those of the 935/78, the LED taillights in the end plates of the rear wing recall to the LMP1 919 Hybrid. The exterior mirrors come from the current Le Mans winner 911 RSR, the exposed titanium tailpipes are modeled after the Porsche 908 from 1968. These quotes continue in the cockpit. The gear selector lever is designed in plywood optics and is reminiscent of the 917, the 909 Bergspyder or the Carrera GT.

The carbon steering wheel and the underlying color display of the 935 are taken over by the 911 GT3 R of the 2019 model year. A massive safety cage combined with a racing bucket seat and six-point belts ensure maximum safety. A second seat for the passenger side is available as an option. An air conditioning system ensures optimal interior cooling. The new 935 is powered by a state-of-the-art 3.8-liter six-cylinder boxer engine with twin turbocharging, which is largely identical to the high-performance standard power unit of the street-legal 911 GT2 RS. The power of the rear engine is transmitted by a seven-speed Porsche dual-clutch transmission DCT (PDK) with rigid suspension to the 310 millimeters wide rear wheels. Of course we also have the version for the Clubsport edition in stock parallel to the special edition.