First look at the model or Sebastian Vettels Formula 1- Ferrari 2015 in Scale 1:18 from Bburago 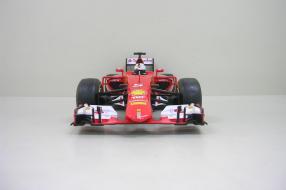 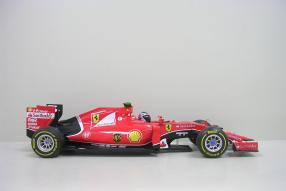 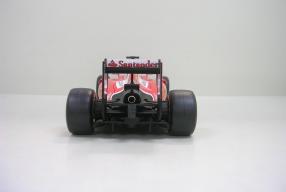 Amazing  what  was laying on this Blogger’s Desk,  First pictures of the Model car of yesterday’s Hungarian Grand Prix winner, the Ferrari SF15-T, driven by four-time world champion Sebastian Vettel,  Surprisingly build by the traditional label Bburago,  who are practically the inventor of the scale 1:18 with the Ferrari F40. Developed by designer James Allison Formula 1 car is the 48th Formula 1 branded and was presented live on the Internet on January 30, 2015. The SF15-T (the SF stands for Scuderia Ferrari, the 15 stands for the year 2015 and the T for turbocharger) is an evolution of last year's car, and has the required changes due to the rules especially in the area of the car's nose.

Bburago knowledgeably recreated the shape of the front wing with its new end plates including its 8 individual elements directing the airflow around the front.  In the front suspension Ferrari continues to rely on a system with tie rods According to Technical Director James Allison, it was indeed difficult to make a light and secure tie bar suspension, but there are however aerodynamic advantages. Bburago has these subtleties transferred exactly in the scale 1:18. Even the small triangular air inlet below the air box, which is used for cooling the engine electronics. Another new feature is the arrangement of the cooler in the side boxes. The car should be faster due to the resultant compared with last year’s car by several tenths of a second per lap. The rear has also been made more compact.

Everything well made, but no info

The rear wing is secured to a single strut. The SF15-T from Ferrari 059/4 is powered by a 1,6-Liter-V6-engine with a Turbocharger, that can’t be seen due to the closed engine compartment. Bburago has taken the classic red and white and black stripes over the entire length of the car and applied the sponsors Alfa Romeo, Claro (a label for mobile networks in latin-america from América móvil), Kaspersky Lab, Santander, UPS and Shell.  Sitting in the cockpits are, of course, Sebastian Vettel (car number 5) and Kimi Raikkonen (7), each official finished model car are shown in the pictures. However we currently do not have information on the price or date of arrival.