Exclusively with modelissimo and ck-modelcars are new Porsche 911 in the 1:18 scale, limited to 504 copies each: 911 RSR and Turbo R by Ruf. 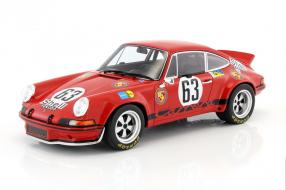 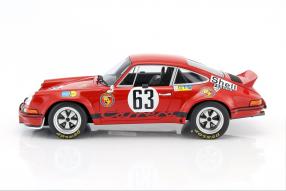 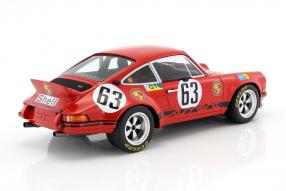 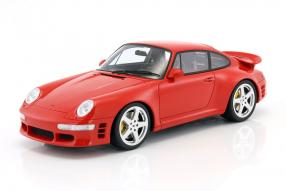 While the teams of the Porsche Supercup are preparing for the coming weekend in Monza with their nine elevens, we are confronted with a flood of new model cars, as Minichamps, Spark, Vitesse, Ottomobile, JadaToys and GT-Spirit seem to have agreed to deliver all On the same day. Including the already mentioned Porsche 911, which GT-Spirit has produced in cooperation with the mentioned dealers and exclusive partners. Let's start with the eleven, the Porsche 911 Carrera RSR in the steering wheel of which the motorsporters Georg Loos and Jürgen Barth have reached for the Gelo Racing Team. A racing car in the shape of the Ur-911, beautiful with chrome edges on the side windows, front and rear windows. Chrome also on the delicate exterior mirrors and the strap handles.

The shape and appearance of the miniature, which has only been built 504 times, is excellently matched with the look of its prototype. The small Nine-Eleven is well-built up to the structural recesses on the rear apron. On the ventilation grille in the bonnet, the 2.7 clamps and refers to the expanded displacement of the six-cylinder boxer engine, which has delivered 154 kW / 210 hp. Of the power set, we see little, because the model car was made from resin plastic and the hood with its characteristic for this type duck tail - is closed - that is spoiler. The hood is made of glass-fiber reinforced plastic, which fits very well with the main material, from which the model with the article number ZM102 emerged.

The predominantly black, naked interior reflects very well the conditions, which at that time in this special sport version ruled. Insulation material and linings were omitted for reasons of weight. For this, the racing car offers a fat roll-over bar to protect the drivers Barth and Loos in case of a rollover. The model for our model stepped up to the 24 hour race at Le Mans in 1973, from which the Matra-Simca MS670B Equipe Matra-Simca Shell emerged victorious after 355 laps. Our Porsche 911, Jürgen Barth and Georg Loos had brought 311 laps behind after the expiry of the 24 hours were found with the RSR Group 4 / GT 3.0 at the 10th place overall again. A great achievement!

By the way, 55 cars were only built by the RSR. In 1973 the G-model with its characteristic bellows was introduced to the thicker bumpers. The second special model of the two aforementioned merchant has GT Spirit the model Porsche 911 series 993 - 1993 to 1998 announced - dedicated than 911 RUF Turbo Limited, however, been clearly than by the hands of the legendary Porsche tuner (ZM110) connected started his work to increase the performance of the cars from Zuffenhausen 1975 and 1981 as an independent motor vehicle manufacturer at the Kraftfahrt-Bundesamt. The prototype of our model is the Turbo R, so a 993 Turbo with a 3.6 liter bi-turbo engine that puts 360 kW / 490 hp to the road and from 1994 to 1997, the halls of reputation left; optically relatively harmless at the skirts and aprons.