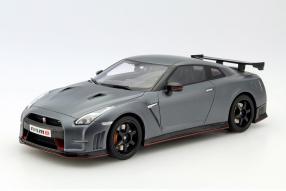 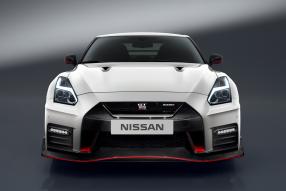 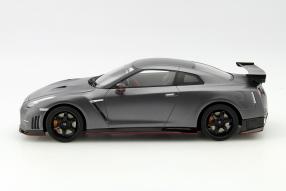 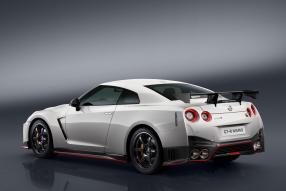 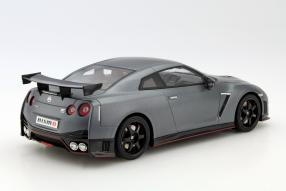 Among the richest tradition of sports car is the Nissan GT-R, a since December 2007 by the Japanese carmaker offered, as visually attractive as extremely sporty accessible and sweet Sportcoupé counts. Modellers GT Spirit has now asked fits to a quality model car 1:18 scale to the wheels, which at its highest output increases based on the latest version of the Nissan GT-R as an example: Since the summer of 2014, there are namely in the power to 441 kW / 600 hp-enhanced version of the in-house motorsport division of Nissan, called Nismo - the first two letters of Nissan Motorsports behalf collectively. Nismo is engaged in the Japanese GT Championship and in other classes and engaged in the processing of road vehicles à la AMG, the BMW M GmbH or the quattro GmbH.

Let's look at the model car made from resin plastic to precisely whose doors and hoods are closed. GT Spirit applies among collectors as one of the best sources for those made from polyurethane casting resin Resin miniatures, which provide a lower demand on the mold and make the often housed in small editions on the market miniatures economically only represented. From this, exclusively at modelissimo and ck-model cars Nissan GT-R available there are 504 copies that come in color Nismo KBL Mat Grey in trade. When modeled this color, costs the 5,000.00 euros extra; the basic price for the Nismo amounts to 149,990.00 Euro. It was just always been more expensive to have a special flavor, and a Nissan GT-R Nismo guaranteed in Porsche, BMW and Audi-country high exclusivity.

For the first time the GT-R as its predecessor Skyline GT-R (R34) was not a descendant of the Skyline series more, but a separate model. Nevertheless, Nissan equipped the sports car with all-wheel drive and donated him to the two turbochargers force-ventilated 3.8 liter six-cylinder potent power source. In the version of 2010, the athletes reached with its 404 kW / 549 hp on the road 315 km per hour top speed. In several steps, Nissan GT-R optimized, offered a limited lightweight variant and improved response and performance at medium and upper speed range. The increase in body stiffness and lowering the center of gravity were more facelift.

The path to today's GT-R

2014 came to optical changes: LED headlights with better cornering illumination, and the graph altered taillights with 4 LED rings. The makers of GT Spirit have these requirements as well implemented into the model as the fine points on the body and the interior. While these changes for the collector with the new model car are understandable, the revisions from the chassis in terms of stability and comfort in the showcase of more theoretical nature remain; as well as the new tuning of stabilizers and dampers. But the nature of the outer skin impressed us. Example apron: Three Dimensional taken in the right proportions, it shows a sporty aggressive front of the Japanese by knowledgeable; the honeycomb of the grid in the radiator grille has taken exactly GT Spirit.

The same applies to the contours of the bonnet and the wide flared wings. Prototypical running black are the air intakes on the bonnet and A-pillar. The small replicas of the 10-spoke alloy wheels allow a view through to the elaborately reduced braking system. Technically very good job, the French have done well in the details of rear apron: The honeycomb grille to the diffuser, the large rear wing and tinted in red and white taillights draw a realistic image of the Nissan GT-R Nismo. What, incidentally, also applies to the extensive reduction of the interior. Seats, cen