Welly who is from an Audi R8 of the second generation as a novelty in the current program. The model car 1:18 scale with impressive features. 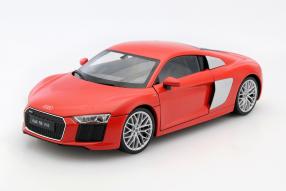 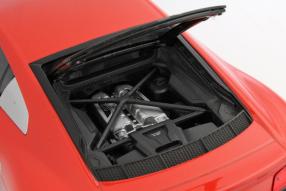 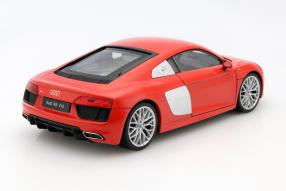 The Audi R8 is one of the sports car of the favorite children of the model car maker. Also in the second generation - presented on 26 February 2015 - he enriched been to many versions the display of model car collectors. This both in 1:12 of Premium Classixxs, 1:43 Herpa and 1:18 of iScale. The latter model is one of the best miniatures that exist of the Audi R8, for the finish and build quality of the advertising model in Audi's packaging is unsurpassed. However, it is not really cheap with 99.95 euros. Welly now offers an alternative for 34,95 Euro which did not affect badly from the first impression. The Welly R8 comes in two colors, which are modeled on the Vegas Yellow and Red Dynamite Audi and iScale. And the details of the models diecast zinc are also not bad.

But let's start with the body: Look and appearance perfectly match the model. The fit of the openable front hood, the rear window and the two doors is at a very high level. The times of Billigheimer appear to be over: Cheap models, which formerly stood for lax processing and finger-width gaps in the functional parts. Today - as can already be seen at the Mercedes-AMG GT Maisto - are the diecast cars of lower price classes on par with the more expensive counterparts. When Welly R8 also glazing and radiator grille fit perfectly with the environment diecast. But where the collectors have to compromise? In detail, specifically printing and painting the interior, panels and dummy engine are not as strong run, as the counterpart of iScale.

Also at Mercedes-AMG GT we have identified that the body no shows weakness against the more expensive models Norev, but fittings and interiors significantly less accurate - are carried out - well decorated not really bad and absolutely complete and comprehensive. This recipe has Welly transferred to the R8 and offers a truly stylish model car at a low price. Incidentally Welly also has a heart for the collectors of the scale 1:24, in which the sports car is also available in yellow and red. For example: The Audi R8 V10 5.2 FSI is available in two versions to choose from - with 397 kW / 540 PS and 449 kW / 610 hp. The top model accelerates in 3.2 seconds from zero to 100 kilometers per hour and further to 330 kph top speed. As might be expected, the car is equipped as standard with all-wheel drive. From which one sees when Welly model not so much, but it gets a grade B anyway.