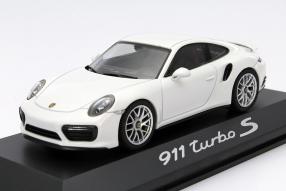 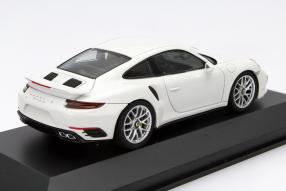 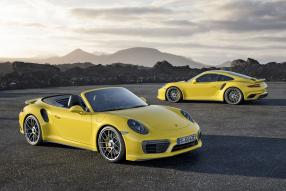 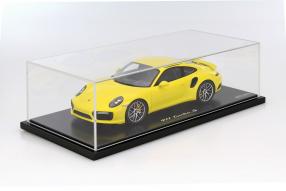 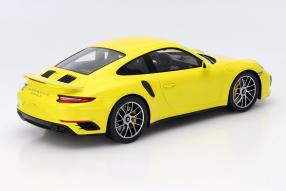 The advertising models presented at the North American International Auto Show 2016 Porsche 911 Turbo S Series 991 II have arrived! The manufacturer Herpa and Spark have jurisdiction and that the license is divided and each produce at 1:43 and 1:18. The new Turbo S is the top model of the series, again by 30 kW / 40 hp more than the Turbo. Stark, the two have become miniatures, each coming in the typical Porsche overpack. Herpa requires 49.95 euros for the model; Spark 329,95 Euro. However, the price difference is not to make believe that the smaller Turbo S saves to details: The Dieterich Hofener have come with the Coupé a fantastic model in the Accessories Shops of Porsche and the selected Internet retailers.

In contrast to the model of the Spark small Herpa is made of die-cast zinc. Doors and hoods remain closed long ago what the 1 in this scale: 43er advertising models thus with the 1: share of Spark 18er. But that does not mean that Herpa has spared features in the interior: dashboard and seat design, center console and door panels are perfectly done. All controls are colored correctly. What naturally also applies to the model of Spark, as the team to Hugo Ripert has recreated the new nine-eleven in just as much attention to detail as the Dieterich Hofener. Of course, the details in the interior are a little easier to see; they are indeed greater. In the area of ??the exterior but both models are perfect replicas of the original.

In particular, the lattice of the engine room ventilation on the boot lid have done it to us in both models, but also the replicas of the wheels and braking deserve kudos to both addresses. So in both cases, we assign a 1; So top marks. However, for those who no longer on the clock already, what distinguishes the new 911 Turbo and 911 Turbo S, we have summarized the most important information on the model. The new Porsche Turbo was introduced in late January 2016 in the trade and are from the start as a coupe and convertible available. The twin-turbo six-cylinder with 3.8 liters in the 911 Turbo now develops 397 kW / 540 hp. This performance boost is achieved by modified intake ports in the cylinder head, new injectors and increased fuel pressure.

Looking at the performance

The 911 Turbo S develops with new turbochargers with larger compressor now 427 kW / 580 hp. Porsche continues to rely only manufacturer turbocharger with variable turbine geometry in conjunction with petrol engines. Optical happening at first glance the new top model not much: Sweeping changes to the design, we did not expect. The apron and the rear design with a newly designed engine cover were revised and catch the eye. New side air blades and LED lights with double bridge to let the front even wider. There is a new design for the 20-inch wheels. On the 911 Turbo S grace as now 7 instead of 10 double-spoke rims with central locking.

Also new are the wheel dimensions for the 911 Turbo: With 9 J x 20 at the front and 11.5 J x 20 at the rear the new wheels are wider at each one-half inch. They therefore comply with the wheels of the 911 Turbo S. The new door handles come now as in the Carrera models without inserted plastic bowls. Under the hood is more emotionally done: The new engines feature called Dynamic Boost function to improve the response. The charge pressure remains when the load changes - get - so in recently releasing the accelerator pedal. This is achieved so that the fuel injection is stopped, but the throttle valve remains open.

So the engine responds practically without delay give to renewed gas. In sports and Sport Plus mode, this function is more pronounced than in the normal mode. In 2.9 seconds, the 911 Turbo S Coupé accelerates to 100 kilometers per hour. The top speed is 330 kilometers per hour to the 12 higher than previously. The 911 Turbo reaches the 100 in 3.0 seconds, top speed is 320 - plus 5 kph compared to its predecessor. Here, the coupes, cabriolets content now 9.1 liters, 9.3 liters of fuel per 100 kilometers; minus 0.6 liters in all. Achieved with the advanced electronic engine and transmission management with revised shift maps.