Just recently we reported on a current version of the Corvette because it sends us on a journey through time to the early days of the sports car with the big names. 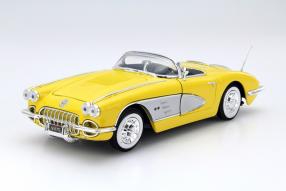 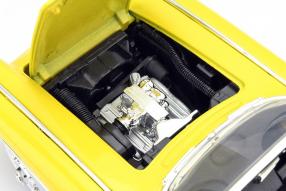 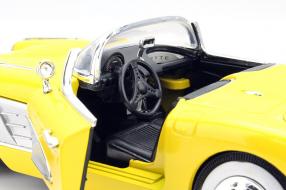 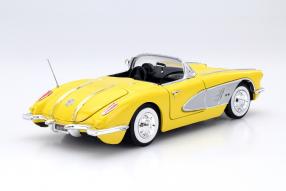 For the start of the  week we have a car to dream about - although it really does not fit the season, because at these freezing temperatures are classic convertibles American manufacturer not suitable vehicles. But that's the advantage while collecting car models: A model allows it in a warm room, dreaming of better times; especially when curves and contours of the miniature so perfectly reflect the appearance of the model, as is the case in the case of the Chevrolet Corvette.

Moment, Chevrolet Corvette, there was not exactly what? Exactly: The attentive reader will know that we have published a reachable via this link articles about Corvette until January 11, 2016; this time it is not about the very latest model, but a model for the vintage Corvette 1958 to motor Max presents us a great car in 1:18 scale.

Looking back on the first series of the Corvette

So lets travelto the other end of the time line, the origin of the Corvette, at the time of Corvette C1, the first Corvette, which was built in 1953-1962. That sounds like a long time, but it is not, because almost every year the Americans subjected their cars at that time optical and technical revisions without changing the base. The Corvette C1 of the Model 1958 is basically the third variant, after the base model and the first major revision in 1956. For the first time the car got twin headlights, has been lengthened and widened, without chassis and suspension have been modified. Everything therefore only cosmetic, and from this the Americans had always been very much left for the facelift of their vehicles.

The teeth in the grille

Already in 1953 car, built only in a small number of 300 copies, had received an aggressive-looking grille, in the vertical struts gave the impression to stand like teeth in the slipstream. Such a look on the highways offered much overtaking. Also, our model car as a model from 1958 is characterized by these retained look perfect. Motor Max realized for modest 37.95 euros a rich Details miniature diecast which complements the contemporary yellow paint to lots of chrome: chrome on the grill, the lush trims, the wound windshield frame and the exterior mirror housings, headlamp surrounds and the hubcaps. The Chevrolet logo proudly displayed on the prototypical bonnet with its indicated ventilation slots.

The inner values of the Corvette in 1:18

With the front hinged  we get a clear view of a three-colored elaborated motor which provides no wiring or the like, but the components division of the prototype of 169 kW / 230 hp to 213 kW / 290 hp V8 retold acceptable. With 4.6 liters of displacement it went off; the three-speed automatic transmission debuted last year. The fact that the painting of the bonnet front inside a little thin precipitates and no replica of an insulating material can be seen, the low price is due. For compensate whitewall tires and the second color on the side more than enough. So there is much to discover, and thus also to dream: The Corvette C1 on Route 66 towards the summer - a beautiful dream, which can be enjoyed even more intense with the colorfully painted model.