"I have no power." - With this radio message from Kabuki Nakajima, a nightmare began for Toyota at the 24 Hours of Le Mans 2016. In the lead and with the long-awaited first victory in sight, the Japanese suffered a turbocharger failure with six minutes to go. 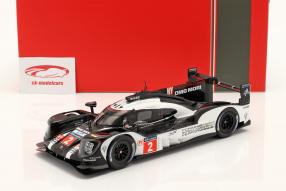 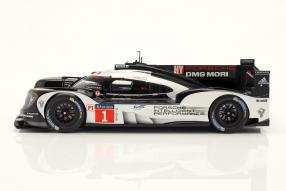 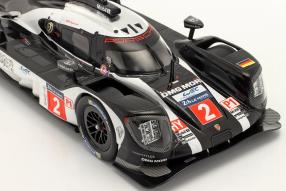 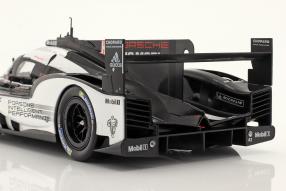 Toyota's heartbreaking fate brought Porsche the 18th overall victory in Le Mans. The winner car, the Porsche 919 Hybrid from Marc Lieb, Romain Dumas and Neel Jani was produced by Ixo in scale 1:18 and is a bitter sweet memory to one of the biggest Le Mans drama of the recent past.

Unexpectedly, Toyota put its stamp on the 2016 edition of the 24 Hours of Le Mans. Porsche and Audi were the favorites for victory, as Toyota had extensively modified its car over the winter, especially the powertrain. In the run-up to the long-distance classic, speed and durability did not give the impression that Toyota would be entering with a winning car.

Wrong thinking, because Kazuki Nakajima, Sébastien Buemi and Anthony Davidson were in the lead because of their own power for large parts of the race. Everything looked as if Toyota would finally celebrate a Le Mans victory in the 18th attempt. After the Porsche pitted shortly before the end, Nakajima was leading by around a minute and a half with seven minutes to go when he suddenly radioed on the Hunaudières straight that he had lost power. Final driver Neel Jani was already approaching in the Porsche when the Toyota came to a standstill on the crowded start-finish straight and Jani passed it there.

Drivers and teams, as well as spectators on site and around the world, were gripped by all kinds of emotions when, one lap later, the Porsche unexpectedly crossed the finish line as the winner. Toyota's suffering did not end here. Kazuki Nakajima was able to get the wounded TS050 going again, but it took too long for the final lap. As a result, the car didn't even make it into the classification.

Again as a reminder: The model we present here is not the Toyota, but the victorious Porsche 919 Hybrid with starting number two. But its story is best told about the suffering Toyota. The outpouring of sympathy that the Japanese felt after the race was immense. And so, with the model of the 2016 Le Mans winner, you not only bring home a Porsche, but also a piece of Toyota.

Ixo produced this car from Neel Jani, Marc Lieb and Rmain Dumas in scale 1:18 true to detail and exclusively for ck-modelcars. The sister car from Timo Bernhard, Brendon Hartley and Mark Webber is also available. The vehicle with starting number 1 had to stop early because of a long repair and achieved postition 13 in the over all ranking.

[06.05.2022] Chevrolet is breaking new ground and is using a mid-engine concept for the Corvette C8.R 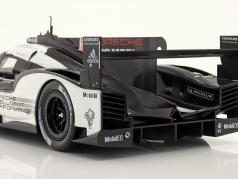 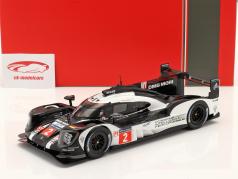 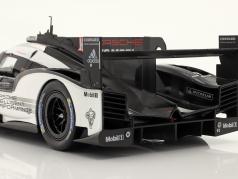 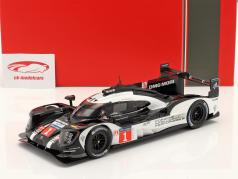