In September 2009, the 63rd International Automobile Show took place in Frankfurt. Porsche presented the 997/2 in a Limited Edition. 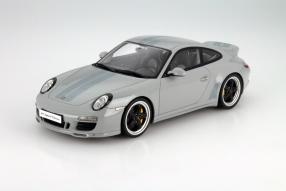 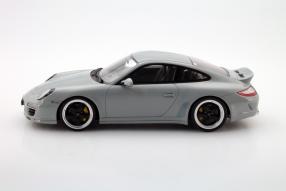 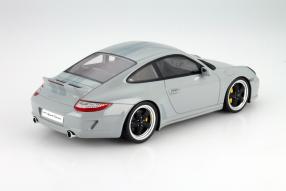 It is almostthe same with Michael Ende as with Porsche: They both tell a neverending story:  Ende published in 1979 the book "The Neverending Story" and took the  small Bastian on a jouney though fantasien and Porsche tells, since 1963 with the Model 911, a story that the fans of sports cars captivates with ever new variations. As with the IAA 2009, that Porsche on the basis of the model 997/2 Porsche 911 Sport Classic presented.
The enthusiasts of the model AutoLabel GT Spirit have this special edition now reduced in the 1:18 scale and thus a limited edition of only 250 pieces model which sets an exemplary prototypical monument. The model of the Porsche 911 Sport Classic GT-Spirit is to have under item no GT047. Let's look at the prototype and model even more closely.


The most important facts about the prototype

According to information from the home of car manufacturer Porsche the Porsche 911 Sport Classic was developed by the Department of Porsche Exclusive in a period of 3 years. Porsche Exclusive is the department that specializes in individualisation of customer vehicles. The 911 Sport Classic employees can give full throttle: The double-dome roof is the most obvious detail of this development, which immediately catches the eye.
However, the fixed rear spoiler - reminiscent in its shape to the so-called duck tail of the Porsche Carrera RS 2.7 model 1973 - attracts the attention of the viewer. Compared to the Carrera S, the rear of this special model has been widened by 44 millimeters. Like other variantions  the Sport Classic also recieved an independent front spoiler.


The engine received a power boost

The stylish chrome lettering on the hood is not the only difference from the standard 911 S, on the engine: The performance of the proven 3.8-liter boxer with direct injection and 283 kW / 385 hp was vacuum-controlled by the installation of a new resonance intake system with 6 switching flaps increased to 300 kW / 408 hp. It is shifted via a manual gearbox with 6 gears. Also, the PASM sports suspension was lowered by 20 millimeters. Aluminum wheels in 19-inch format and varnished rim star and a ceramic brake for better traction and safety. The interior is as usual high-quality. A premiere, there are at the head offices: the first time so-called woven leather is used for the seat center sections and door panels.


The 911 Sport Classic as a model car

This results in smooth leather and yarn woven seat surfaces and door panel trim. Even brown natural leather shade Espresso flatters the eyes of occupants.  those who have been to the German dealers since January 2010, and could pull out 201,682 euros out of their wallet or handbag, now the fans of the model car from GT-Spirit can with 89.95 euros, the cost of the resine plastic model,can have it much cheaper. The car model is painted in prototypical Sport Classic Grey and presents shapes and lines that exactly match the feel of the design of the prototype. The finish of the surfaces affects technically perfect. The add-on parts such as the transparent headlights or the red-colored taillights fit perfectly into the environment.


The door handleswere impressivley clean manufactured . The light-alloy wheels, close to the design of the legendary Fuchs rims, has GT Spirit carefully modeled; the caliper is prototypically painted in yellow. The double decorative stripe that runs from the bow to about the rumpis also very well applied. the heating elements of the rear window defogger  are  thin or thick - depending on the perspection.GT Spirit forms the interior as usual every detail of the prototype, dimensioned instrument panel and instrument panel prototypically correct and meets with the colorations which details the controls absolutely correct. If the model AutoLabel from France continues to operate at this level, then GT Spirit coul be the third never ending story next to the 911 and the book by Michael Ende.