The focus is on a Porsche 911 GT3 R from Schnabl Engineering used at the 24-hour race in Spa-Francorchamps this year as a 1:43 modelcar. 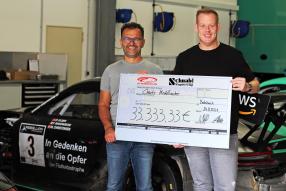 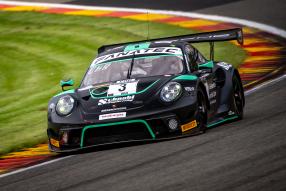 “The Nürburgring and the whole region are very important to us,” says Christoph Krombach. “There was no question for us that we wanted to help and had to do something. With Sven Schnabl and Minichamps, we have taken two long-term partners on board, without whom this help would not have been possible to this extent. "

Krombach speaks of the donation campaign as part of the 24 hours of Spa. In the largest GT3 race in the world, the Schnabl Engineering racing team ran a Porsche 911 GT3 R, driven by Dennis Olsen, Frederic Makowiecki and Michael Christensen, whose simple design commemorates the victims of the flood disaster. Apart from the obligatory sponsors and the team logo, the car was only adorned with the words “In memory of the victims of the flood disaster”. “It was undoubtedly a very emotional race for us. Our participation was clearly for the flood victims, ”explains team boss Sven Schnabl.

The result is more than overwhelming for Schnabl and Krombach:  A rounded net proceeds of 33,333.33 EUR were achieved by the # 3 as part of the model car campaign. In total, more than 1300 pieces were sold in 10 days and will be sent to more than 70 countries around the globe in December.

“We are incredibly pleased to receive this amount of orders and the many positive and supportive messages for our campaign in such a short time. We are very grateful for every customer, because without them this large donation could not have been raised”, says Christoph Krombach from CK Modelcars. “What is special is the huge feedback on the action from various drivers and racing teams in the social networks that shared the action and made it public. In my opinion, the project was more than worth it. We couldn't believe the number when the sales campaign started online and sales skyrocketed in the first few hours. We really didn't expect to have more than 1,300 sales”, says Sven Schnabl proudly. CK and Schnabl Engineering are particularly grateful to the manufacturer Minichamps, who completely waived the margin in order to achieve the maximum possible donation amount. “We are pleased that this model car campaign met with such an overwhelming response. I would like to personally thank all those who ordered it for the support of the flood victims. Minichamps will produce the model at cost to make our contribution to this extraordinary donation,“ said Paul G. Lang, managing director of Minichamps GmbH & Co KG. In the next few days the donation will be divided into 2/3, 1/3 to the flood relief aid of the Ahrweiler and Rhein-Erft districts.

“It is important for us to set an example with this campaign and to point out the need for donations. The flood victims of this catastrophe are far from finished coping from the disaster. Seeing the disturbing pictures of destroyed houses and homeless people in the middle of Germany, we have to help together. This also applies a month after the disaster”.