Well produced modelcars from diecast in scale 1:43 replicate the vehicles of the brand Wartburg, Trabant, IFA and AWZ 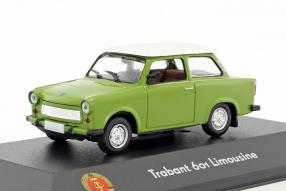 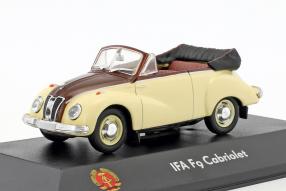 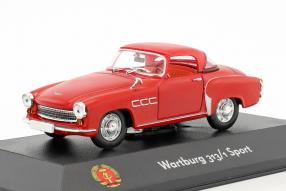 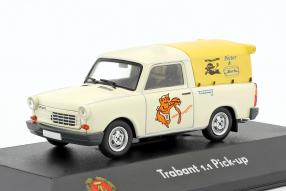 As part of the Easter sale, which existed over the past Easter hollidays at ck-modelcars.de, the miniatures from Editions Atlas also moved into the focus of demand, which are reminiscent of the stars of the streets of former East Germany at a particularly low price: The GDR car collection. The modelcars of the Trabant 601 sedan in format 1:43 prove impressively how attention to detail it is with this label. The miniatures know how to inspire not only with their harmonious proportions, but also with the very neatly crafted details. The AWZ P70 station wagon, the Trabant 601 sedan, the Trabant 1.1 pickup, the IFA F9 Cabriolet 468 and the Wartburg 313/1 Sport are still available. The editors of the ck-modelcars.de team took a look at these modelcars and their finish using the Trabant 601 sedan.

The comparison with the Trabants, which are still chugging through the streets in large numbers in Berlin, shows at first glance that the proportions of the model car listed under item number MAG JL01 / 7230001 exactly match those of the legendary model that was first released on the road in 1965. It is not always easy for the mold maker to transfer the appearance of the curves of a body exactly onto a model, but in the case of the Trabant and the other miniatures mentioned at the beginning, this has undoubtedly been very successful. But even at second glance, the overall positive impression remains: It is the many little things that the developers of the models paid a lot of attention to and showed a lot of love for. The Trabant 601 sedan reaches collectors in a green that reflects the spirit of the times.

The model cars of the GDR car collection are packed in a simple cardboard box, which is lavishly printed with many pictures. Inside, the miniatures are in a blister that can be divided into two halves, which protects the models from damage just as well as the showcases in which Minichamps, for example, delivers the small cars. At Atlas, the models are parked on plastic bases similar to those used by other large-scale manufacturers: Here, however, they are decorated with logos such as the GDR's coat of arms in four-color printing. The attention to detail in the Trabant 601 is demonstrated, for example, by the separately inserted, transparent plastic parts for the headlights and indicators as well as by the corresponding red taillights. The radiator grille and the door handles are engraved on the Trabant 601 in 1:43 format and painted prototypically.

The interior of the model of the 601 shows the technology prevailed at the time correctly; the model is equipped as sparse as the car. But: Also in the interior, the add-on parts such as levers, the door handles on the correctly reproduced side panels and the instruments are authentically retold. Nationality plates, the type lettering, the color highlighting of the plastic parts on the bumpers painted in the vehicle color prove that the people at Editions Atlas looked closely. The conclusion of the editors: Well-made contemporary witnesses, these are the miniatures of Edition Atlas, which belongs to the Italian DeAgostini group. Informative, numerous illustrated brochures that contain detailed information about the models are supplied with the models.

Here: Click to the modelcars of the DDR car collection