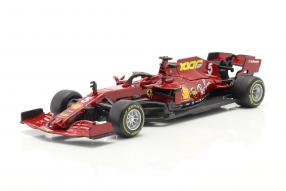 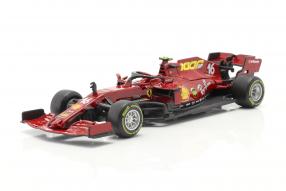 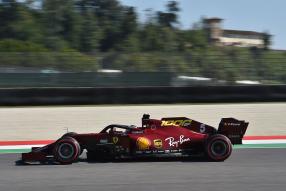 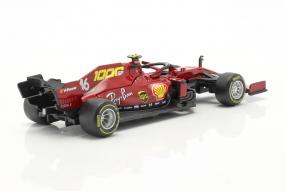 With the here presented miniatures to last year's Ferrari of Sebastian Vettel and Charles Leclerc, Bburago has landed a real blast! For under ten euros, these modelcars are now available, which show off the special style of the Ferrari SF1000 for the Grand Prix of Tuscany: The racing team, which is so rich in tradition, celebrated the 1,000 Grand Prix of its history there on September 13th, 2020. For the ninth round of the 71st season of the premier class in motorsport, which got messed up due to the corona crisis, Scuderia Ferrari therefore entered with optically modified vehicles. With the choice of the much darker shade of red, the racing team wanted to recall the paintwork of the Ferrari from Formula 1 in the 1950s. The two modelcars show exactly this color scheme in an acceptable quality and level of detail for this price range.

Bburago has exactly matched the color of the models of the two SF1000s and has shown the urge for perfection in downsizing the other details: the design of the starting numbers is also reminiscent of the time of Alberto Ascari and Juan-Manuel Fangio. The number 1000 lights up in yellow on the cover of the drive set; on the role models as well as on the modelcars. Of course, add-on parts such as the front spoiler, underbody and splinters appear a bit coarser on these miniatures than on the much more expensive competitors such as LookSmart, but the overall package is still convincing: These car models look less toy-like than previous models. The fact that the overall impression is right meets expectations. The modelcars appear under item number 18-36823VM with starting number 5 for Sebastian Vettel and 16 for Charles Leclerc, listed under 18-36823LM.

Let's look back at last late summer: The Tuscany Grand Prix took place at the Autodromo Internazionale del Mugello in the Italian municipality of Scarperia e San Piero and covered a distance of 59 laps of 5.245 kilometers, a total distance of 309.455 kilometers. Leclerc finished qualifying in 5th place; Position 14 on the grid for Vettel. Not a really nice place for the anniversary. In the same order, but in 8th and 10th position, the two stars left Tuscany after the race. The brilliant winner was once again Lewis Hamilton. From the point of view of ck-modelcars.de, the winners are definitely those collectors who secure one of these beautiful models. Maybe not even for yourself, but for the offspring. Whatever the case, the models remain unique, because a 1,000 race will never come again!