As advertising models in the packaging of the car manufacturer from Stuttagart, now matching miniatures of the four-door coupe in scale 1:18 come in the delivery 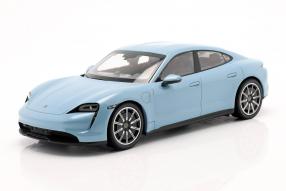 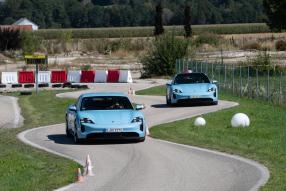 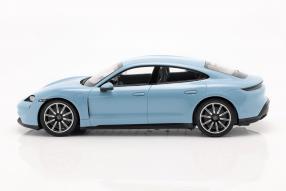 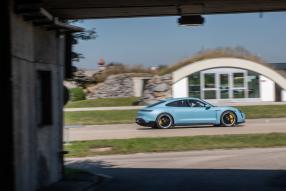 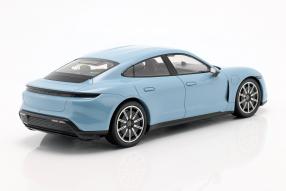 The center of Porsche's appearance at the Los Angeles Auto Show in November 2019 was the new Porsche Taycan 4S. It rounds off the model range at the bottom, which so far existed of the Taycan Turbo as well as the Taycan Turbo S. The Taycan 4S is available with two battery sizes: With the Performance-Battery it reaches up to 390 kW / 530 hp, with the Performance-Battery Plus up to 420 kW / 571 hp overboost performance. To this bullet with four doors and large tailgate, the car manufacturer from Stuttgart presents modelcars to the fans in in-house packaging, called advertising models in collectors' circles. In these boxes, buyers will find miniatures of the Porsche Taycan 4S in scale 1:18 as well as in the color frozen blue metallic, which come from the production of Minichamps and are made from diecast. We look at role models and models.

In the previous article on this blog, the editorial staff used the Singer Reimagined Porsche 911 to show how legends and modern technology can be brought together; in the prototype as in the model. The Porsche Taycan 4S, however, leaves no room for doubt: it stands alone for the future and at the same time forms the entry point into the Porsche electric model range. A single-story performance battery with a gross capacity of 79.2 kWh is installed as standard. The two-tier Performance Battery Plus known from the Taycan Turbo S and Taycan Turbo is available on request: Its gross capacity is 93.4 kWh. In both variants, the Taycan 4S accelerates from standstill to 100 kilometers per hour in 4.0 seconds. The top speed of this version of the four-door coupe is also a uniform 250 kilometers per hour.

With two permanently excited synchronous machines on the front and rear axles, so all-wheel drive, as well as a two-speed gearbox on the rear axle, the 4S has the main technical highlights of its model brothers in terms of drive architecture. The same applies to the intelligent charge management and the exemplary aerodynamics. With a drag coefficient of 0.22 or more, it makes a decisive contribution to low energy consumption and thus a long range. This is up to 407 kilometers with a performance battery and up to 463 kilometers with a performance battery plus. But nothing of this technology can be seen in the modelcars from Minichamps, because doors and hoods remain closed. The miniatures convince with a perfect reproduction of the lines and the impression of the puristic, powerful design.

Viewed from the front, it seems really wide and flat, with strongly arched fenders. The body is characterized by the sporty sloping roof line to the rear. The side section is also characteristic with the strongly sculptural shape. The slim cabin, the retracted D-pillar and the pronounced shoulders of the fenders lead to a strong, brand-typical emphasis on the rear. There are also innovative elements such as the Porsche logo in glass look, which is integrated into the strip of lights at the rear. Minichamps has transferred all these details perfectly to the look of the modelcars, which are available in the aforementioned frozen blue metallic under item number WAP0217810L. The curved instrument cluster forms the highest point on the instrument panel, which Minichamps also makes perfectly smaller. The breakup into the future: now also in the model.

Click here to the modelcars of the Porsche Taycan 4S 2019