The small series label has reduced a qualitatively valued model into the format 1:12 with the Italian, launched in 1994 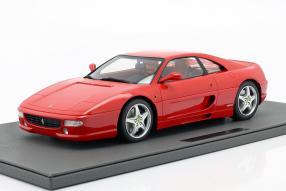 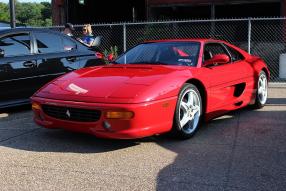 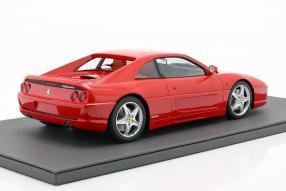 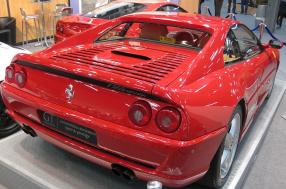 We've started this week at a rapid pace: With the Porsche 911 Speedster of the model series 991 II, we literally presented you great modelcars, because the large scale 1:12 sets visually strong accents with around 40 centimeters long miniatures. To match the red nine-eleven, TopMarques presented a Ferrari F355 from the year 1994 in the same size and at the same time, which appeared under the item number TM12-19A to the trade. The modelcars in this format 1:12 are produced from the high quality polyurethan resin: 500 pieces of the Ferrari F255 Berlinetta are now available. With this, our editorial staff is happy to start the new week and takes a look a the role model, which was the successor of the Ferrrai 348 and was presented to the general public for the first time at the Geneva Motor Show.

The miniatures from TopMarques replicate the original version, the F355 Berlinetta of the model year 1994, which delivers the 280 kW / 381 hp of its 3.5 liter big V8 via six-speed transmission to the rear wheels. The maximum torque is given by Ferrari with 363 Newton meters (Nm), the acceleration from zero to 100 in 4.7 seconds. The mid-engine sports car reaches 295 kilometers per hour as top speed. At the time, the engineers gave the F355 modern features that the 348 customers did not yet know: for example, five-valve technology and an electronically adjustable suspension were introduced to this series, which despite being visually close to the predecessor, was a new car. A total of 11,273 vehicles of the F355, designed for road traffic, were built; the motorsport variants are not included in this number.

In 1995, the F355 had cost about 220.000 DM; nowadays, used Berlinettas - so coupes with solid roof - are traded fro 64.900 EUR. Such a car had two owners, maintained in the checkbook, in execution for the EU and shows 89,900 kilometers on the speedometer. As of today, mobile.de offers 124 F355s of the different body styles. Our variant, the modelcars from TopMarques, is about half as expensive as the above Porsche 991 II in 1:12 and offers the collector the option of retracing the lines and appearance of the F355 down to the smallest angle. Of course, these miniatures win because of their size, because this forces the model builder to reproduce the edges and joints, the subtleties around the dashboard and the interior more precisely. These models can crown a collection or stand alone: they are definitely recommended!