Modelcars in scale 1:18 as well as a set of two miniatures in format 1:43 from Spark remind on the victory of Toyota Gazoo Racing in extraordinary conditions 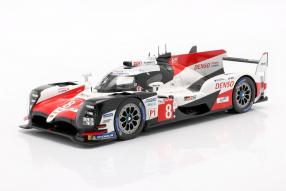 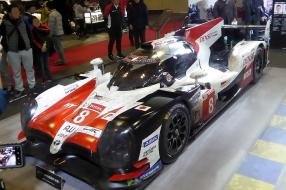 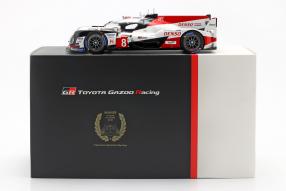 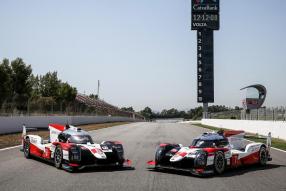 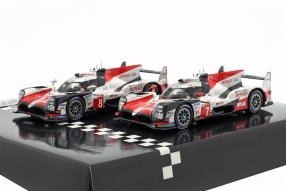 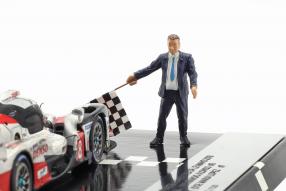 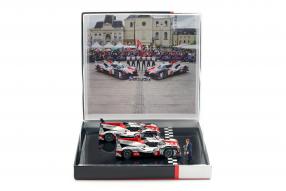 Advertising models, the collectors of modelcars know this term: These are miniatures in packagings that correspond to the CI of the company whose cars they are replicating. Obiously, the models of the Toyota TS050 are part of this section, which are produced by Spark in 1:43 and 1:18 and show the winner cars or the runner-up of the 24 Hours Race of Le Mans 2018: The cardboard boxes carry the lettering of Toyota Gazoo Racing, the factory team of the Japanese car manufacturer. The collector and fan of Toyota has now the opportunity to acquire an exclusive model in format 1:18, limited to 300 units and in such a packaging at an extremely affordable price under the item number TY14118LM. A set of two miniatures in 1:43, limited to about 1,500 units, replicate the finish of No. 8 and No. 7, with a figure waving a flag.

We remember: The endurance winner of Le Mans - Porsche - has withdrawn from the great class LMP1 after the season 2017. Only the factory team remaining there should be Toyota: The Japanese set on the cars with the starting number 8 and the drivers Sébastien Buemi, Kazuki Nakajima as well as Formula 1 - World Champion Fernando Alonso. The car with the No. 7 was driven by Mike Conway, Kamui Kobayashi and José Maria Lopez. The prototype, already presented in 2016, got a six-cylinder-biturbo as well as a sequential six-speed transmission. The power of the 2.4 liter direct injection V6 is given with 368 kW / 500 hp. The same values are also attributed to the supporting electric drive, so that the system output reaches 736 kW / 1,000 hp. A good concept, as it gave Toyota its first win at Le Mans.

The 86th edition of the traditional race was held on the weekend of June 16th and 17th, 2018, at the Circuit des 24 Heures. In summer weather, around 269,500 fans watched how 60 of the 69 registered racing cars from four racing classes tackled the 13.626 km route. 41 of these were scored: Toyota Gazoo Racing achieved the victory of the second round of the 2018/19 FIA World Endurance Championship after 24:00.52,247 hours and 388 laps with starting number 8. In total, Buemi, Nakajima and Alonso had traveled 5,288.052 kilometers. The set shows the finish in a very nice way: The car with the number 7 was two laps behind in the classification, but still became second. A great success for the Japanese, to whom Spark dedicates excellent modelcars. Get it! It doesn't get cheaper!

Here: Click to the modelcars of the Toyota TS050