Schuco has again released a color variant of its beloved VW T2a in scale 1:18 and limited to only 1000 pieces 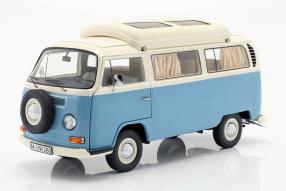 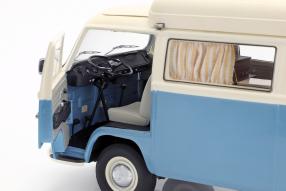 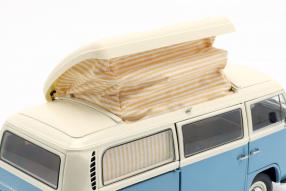 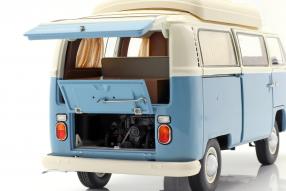 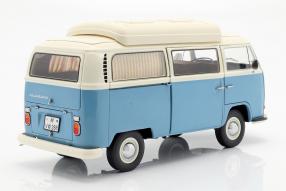 The modelcars of the Volkswagen buses and transporter of the T2 series in the format 1:18 by Schuco are among the best-known miniatures the industry has released in recent years. In the past week, we were pleased about the new entry, which reached us in this respect: The modelcar label from Fürth delivered the limited to 1,000 units Volkswagen T2a camper in the color white-blue, the collectors can park it in their showcase under the item number 450043500. Like the other models of this role model, this T2a captivates with an outstanding harmony of its appearance and lines: every detail, from the chrome lines around the headlights to the rear light, corresponds formally to the original; the radii of the curves could not have made the Schuco mold makers any better.

And in this excellent finish, the small camping bus has much more to offer: Of course, first of all the lifting roof, which turns the bus into a camper, attracts attention. In the case of this modelcar, this works as fully as the prototype: it is hinged to the driver's side and pulls a real material web with it. This would reach the standing height that an adult needs to move and prepare meals. Of course, Schuco has not forgotten to deliver the right internals, which - as well as the lifting roof - are a feast for the eyes. The craftsmanship of this interior inspires us as much as the accessibility through the sliding door. The, known for the VW bus, door has been transferred to the exact original modeled manner in the scale 1:18: A real highlight! Standing ovations for that!

The fact that the interior also offers curtains made of the same material as used for the lifting roof completes the good impression of the interior. Schuco has also donated the VW camper but also all-round openable doors, so in addition to the side sliding door and the two front passenger compartment access designed as functional parts; fully functional are also the large tailgate to the interior as well as the hood. Behind this is a replica of the four-cylinder boxer engine, which drew at that time from 1.6 liters displacement 34.5 kW / 47 hp; just as with all VW T2a, whose production period from 1967 to 1971 included. Our conclusion: With these modelcars to the camper, Schuco has delivered a hard to beat masterpiece, which may even be considered cheap for their price and not only make friends of the Bullis and the VW brand happy.