Minichamps builds up the palette of advertising models in factory packaging with two new miniatures of diecast: 911 Coupe and convertible model series 992 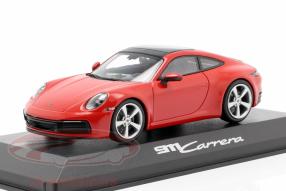 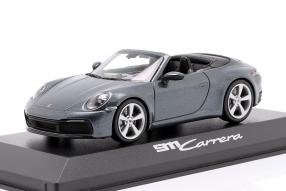 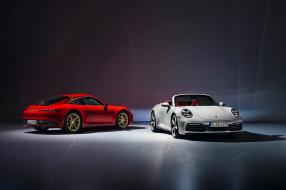 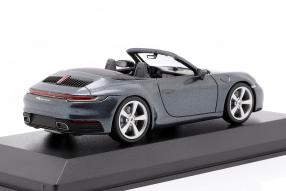 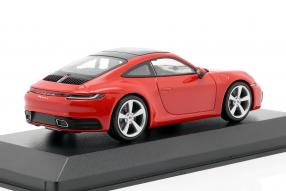 Growth for the nine-eleven shortly before the presentation of the first Formula E-racing car from the people from Zuffenhausen: Porsche extends the model program with the eighth generation of the 911 Carrera. The new sports car comes as coupe and convertible and produces 283 kW / 385 hp from the 3,0 liter six-cylinder-boxer-engine with biturbo charging. This Carerra markes the entry into the 911-family and convices with eleven kW / 15 hp more power compared to the predecessor. He shares the standart equipment almost unchanged with the Porsche 911 Carrera S. These include the interior with the 10,9 inches big touchscreen-monitor and assistance systems as the Porsche Wet Mode for safe driving behavior on wet roads. The 911 Carrera differentiates by smaller wheels and breaks as well as the single tailpipe dazzles of the exhaust system.

To match this, Minichamps, as Porsche's home supplier, is expanding the range of advertising models of the nine-eleven. In biskaya blue metallic appears the Porsche 911 Carrera 2 Cabriolet of the series 992 and the year 2019 under the item number WAP0201750K; The entry-level coupé Porsche 911 Carrera 2S comes in the classic color indian red under WAP0201740K to the collector. As we have already seen from the first miniatures of the latest generation of the 911, Minichamps has done a first-class job and not only transferred the entire look of the sports car exactly to the model, but also met the details like the light strip at the rear. The unit of rear window and ventilation grille combined in the look completes the good impression for the processing of the diecast modelcars.

Front and rear bumper, the rounding of the fenders, especially at the rear and the engravings have been implemented flawlessly by the mold making; The glazing is perfect and everything is like taht under the stroke that the fans of the Minichamps nine-eleven models have come to love it over the years and generations. The hoods and doors remain closed as always in 1:43. Therefore, another look under the sheet at this point. The power transmission at the role model takes over the new eight-speed dual-clutch transmission PDK. This accelerates the 911 Carrera Coupé in 4.2 seconds from zero to 100, the maximum speed is 293 kilometers per hour. With the optional Sport Chrono package, the sprint is shortened by another 0.2 seconds. The prices in Germany starts from 104.655 euro with the coupe and 118.935 euro with the convertible.