A fascinating sports car and modelcars in the two most popular sizes: What does the fan want more for the weekend? Background information to the role model maybe? 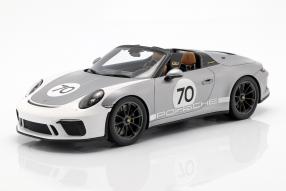 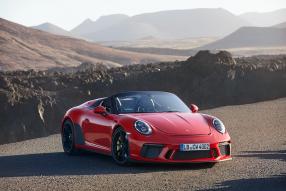 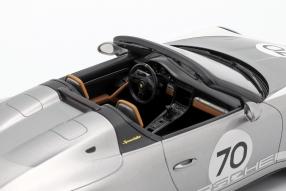 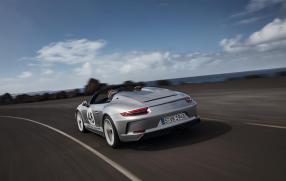 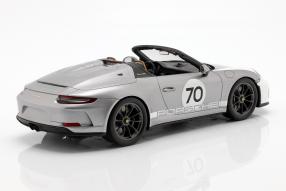 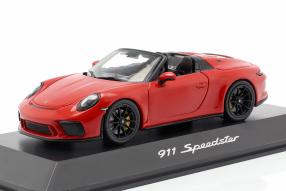 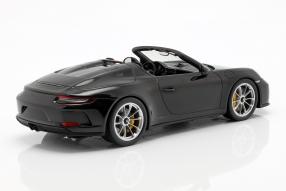 Spark has delivered the miniatures to the Porsche 911 Speedster 2019, whose role model goes back on the study, which was built on the occasion of the 70th birthday of the sports car manufacturer and then of course decided its series production. The open two-seater comes on the street, limited to 1,948 pieces. The quantity reminds to the Porsche 356 No. 1 Roadster, which received its approval on June 8th, 1948 and so does the birthday, wo which Porsche justified last year's campaign 70 years Porsche. Events had taken place world wide under the hashtag #70JahrePorsche. With the new 911 Speedster, the Heritage Design Package celebrates its debut, which Spark transfers to the modelcars. A total of five miniatures have appeared.

The modelcars are available in the following versions: In the scale 1:43 under the item number WAP0201930K in white or in GT silver metallic and the Heritage Design Package under the designation WAP0201940K. In the traditional color Indian red, the model is available in the same size, the world's most popular collector scale, under WAP0209310K84A. In scale 1:18, the Porsche 911 Speedster 2019 of the 991 II series also finds its way into the showcases: with Heritage Design Package and the start number 70 again in the metallic color GT-silver (WAP0211950K) and under WAP0219320K041 in black. As expected, Spark decided to use the miniatures for the high-quality resin as the main material and delivered perfect work in the appearance of the lines.

The design of the models matches perfectly with that of the prototype. The detailing in the area of the front bumper as well as in the implementation of the dashboard is better not to do. They are really cool collectibles, which Spark delivers with this Speedster. The vehicle was developed at the Porsche Motorsport Center in Weissach: Porsche Style and the Porsche Exclusive Manufaktur were significantly involved. The new 21-inch wheels in cross-spoke design and the black leather interior characterize the athletic overall picture of the athlete, who will be the first model of the Stuttgart as mentioned above, the newly created Heritage Design packages offer.

This exclusive equipment line from the Porsche Exclusive Manufaktur allows a further increase in the degree of customization of the 911. In addition to the eye-catching paint finish, the characteristic details include 21-inch wheels with central locking on both axles. Their cross-spoke design is reminiscent of the racing cars of the sports car manufacturer like the Porsche 911 RSR or the Porsche 911 GT3 R. The colored daytime running lights are also used in modern racing. Matching to the exterior color, they are executed here in red. The two Talbot exterior mirrors are in black chrome and platinum. The interior differs from the heritage version of the concept study, previously shown by the use of black leather upgraded with red accent stitching and partial perforation.

All body parts and technology are identical on both versions of the 911 Speedster. These include the shortened window frame with lowered cowl and the correspondingly reduced side windows and the rear cover made out of carbon fiber with a double scoop behind the front seats. Both vehicles forgo a lightweight tonneau cover with Tenax fastening buttons on a hood, which Spark has excellently modeled in the two sizes. The wide body is borrowed from that of the 911 Carrera 4 Cabriolet. Mudguard, bonnet and rear cover are made out of lightweight carbon fiber composite material. However, the suspension comes from the Porsche 911 GT3.

The exhaust system with titanium tailpipes and the powertrain including manual six-speed manual transmission have also contributed to the GT developers Porsche. The same applies to the heart of the special model: the six-cylinder boxer engine of the 911 Speedster 2019 delivers 375 kW / 510 hp and brings the two-seater in four seconds to 100 km / h. The drive set also allows a number of revolutions of up to 9,000 rpm and delivers 470 Newton meters (Nm) of maximum torque. The Speedster reaches a top speed of 310 kilometers per hour. The suggested retail price was 269.274,00 Euro incl. VAT.

Here: Click to the modelcars of the Porsche 911 Speedster 2019