The people from Fürth deliver new modelcars in scale 1:18 out of diecast and in outstanding detailing to the super sports car from Fast and Furious 7 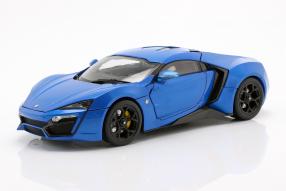 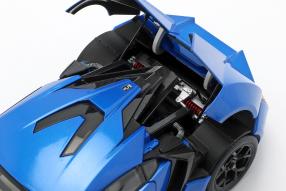 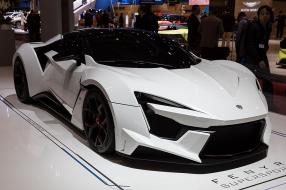 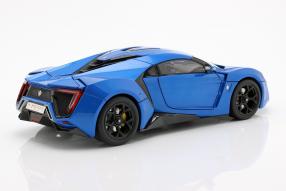 On Monday this week, the ZDF (German TV channel) repeated the strip, which has helped the super sports car Lykan Hypersport to popularize: A jump from skyscraper to skyscraper the role model of our modelcars made by Schuco certainly can not cope in reality, but it was already done visually appealing in the film. The Lykan Hypersport from W Motors was already often our guest and made it again into the blog thanks to the arrived miniatures from Schuco in scale 1:18 and in four colors. Quite simply because of that, because the diecast modelcars with the openable doors and the outstanding details in the engine and chassis area as well as in the interior are so outstandingly successful. Let's take a quick look back at the well-known facts about hypersport, whose production version made its debut on the 2014 Top Marques in Monaco.

Under the breathtaking styling, which is transferred exactly to the lines of the miniatures by Schuco, the bodywork conceals all sorts of finer points, including leather, the sound system and the WLan router. The body is made entirely out of carbon, so carbon fiber composite. This is also found in the interior again. The twin-turbo engine is installed in front of the rear axle and transmits 960 Newton-meters (Nm) of maximum torque to the sequential six-speed gearbox or the seven-speed dual-clutch transmission, which was installed transversely; supplemented by a limited slip differential. The 3.8-liter six-cylinder boxer delivers 582 kW / 791 hp and accelerates the Lykan HyperSport to 100 km / h in only 2.8 seconds, reaching a speed of 200 km / h in 9.4 seconds. The maximum speed is given as 385 kilometers per hour.

34 millimeter thick brake discs with a diameter of 380 millimeters make sure to come down from this pace again. The ABS 8.0 from Bosch also helps here; ABS, ASR, ABD and traction control are also on board. The aluminum rims have a diameter of 19 inches at the front and 20 inches at the rear. They are fitted with 255/35 ZR 19 tires on the front and 335/30 ZR 20 on the drive axle. It is good that the driver sits firmly in the saddle: the carbon seats have airbags that are recessed on the side. If the performance is not fully retrieved, the two occupants can enjoy the features in the interior: Ambient lighting, for example, the light through the exceptionally cut roof window, the premium sound system - but also a very ordinary bourgeois heated rear window.

This exclusive world can be reached by scissors doors that are not shown by any other car. Even this detail reproduces Schuco's modelcars in an exemplary way. When looking at the models, it becomes obvious with how much passion and enthusiasm the Schuco mold engineers took on this vehicle. Whether the successor of the Lykan Hypersport also creates it in one of the feature films of the film series? The Fenyr Supersport has been in production since 2017, also has a six-cylinder boxer engine from Ruf, makes 596 kW / 810 hp and manages 400 kilometers per hour. We are curious what Schuco thinks about this car. But for the time being, we are pleased that such good and new models are available for the much strong demand Hypersport.

Here: Click to the Lykan Hypersport in 1:18 from Schuco