Many names of racing teams, to which the team of Hugo Ripert presents new model cars in the scale 1:43, have long since faded: Throwback Thursday in the Webshop 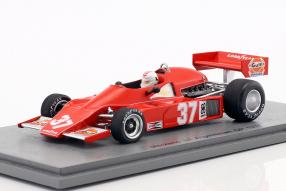 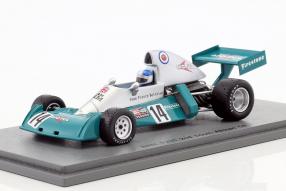 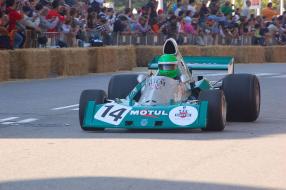 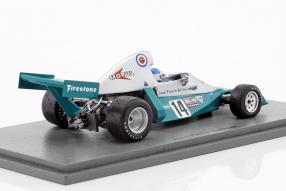 The fans of model cars concerning to motorsport would have been happy about the flood of new miniatures from Spark last Tuesday. The company, which really finds and fills every gap in the range of available models, has delivered many new products. Among them are current vehicles from the starting field, for example the 24 Hours of the Nürburgring 2018, but also a lot of cars from the early days of the new Formula 1. With names behind of racing teams which don't exist anymore today, but to in the time of their active participation, there were no such sophisticated miniatures at motorsport in the premier class anyway. We remember our youth: There was nothing as fine as today's model cars at that time. So, let's take a look at the list of new products of Formula 1 from earlier on!

Of course, the very beginning of the F1 is not 1978 because the premier class of motorsport - then called the Automobile World Cup - was already in its 29th season. This year Spark launched two model cars to the Italian driver Arturo Merzario, who intervened in his time with the homemade Merzario A1 in the race. In the technical literature, there are treated three variants of this car whose aluminum monocoque has been equipped with a Cosworth DFV V8. Merzario started in 1972 and 1973 as a factory driver of Scuderia Ferrari and then moved to Frank Williams. After two years there, he joined March Engineering for a year and subsequently founded his own team in Lombardy; starting with a customer vehicle from March and later the basis for the Merzario A1. Its development was paid by sponsor Marlboro.

The red painted model car with the article number S4846 shows the car in his first race in Argentina, which occured on January 15, 1978 (!) as the Grand Prix of Argentina in the Autódromo Municipal Ciudad de Buenos Aires. For the Grand Prix of France in July, the base color changed to black. The A1 had existed in this color even at the Italian GP of the same year, of which decoration the second model car with the number 4847 exists. Both miniatures impress with the quality of their details, such as the design of the chassis in front, the replicas of the aluminum rims and the cockpit. Driver Merzario sits as a character in the cars, whose role models were unfortunately known to be unable to qualify. The quality of the miniatures, however, is world champion like.

BRM paved the way to Formula 1 for Niki Lauda

In 1974 and 1975, the BRM P201 was a participant in the Automobile World Championship. Jean Pierre Beltoise had started for the team Motul BRM at the South African Grand Prix on March 30, 1974 in Kyalami, of which the model car with the article number S4796 tells about. He was also the one who won the 1972 Monaco Grand Prix for BRM - correctly British Racing Motors - for the last time. In addition to Clay Regazzoni, a young Austrian started for BRM 1973, Niki Lauda. With his performances there, he drew attention to Enzo Ferrari. Connections that today only model cars remember to, right? From the P201 Spark also supplied the models to the cars of Mike Wilds and Bob Evans, who drove in 1975 for BRM, but did not earn points. The team, which in 1962 with Graham Hill the drivers and constructors' championship and then three runner-up championships, gave up in 1977.